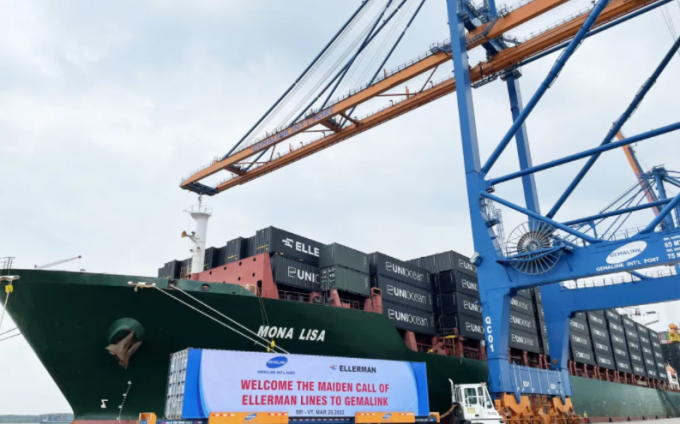 According to Vietnam’s ministry of transport, VND1.42trn ($62.17m) will be invested in dredging to allow lager vessels to berth at the five container terminals, and the channel width will be increased from 310 metres to 350m, and the depth from 14m to 15.5m.

Benoit Klein, CEO of Gemalink International Port, said the expansion would bring much needed extra berth capacity. He The Loadstar: “In addition to the extra port capacity, it will allow the handling of two mega-ships side by side.

“This is currently not possible and hinders carriers from adding time-sensitive services like Asia-Europe, which are our target at Gemalink so we can better balance our business, which is currently almost exclusively transpacific services”.

Gemalink is the newest terminal at Cai Mep, having begun operations in January 2021, and last week the terminal celebrated its first 1m teu.

“Without last year’s lockdowns we should have been able to reach the 1m teu mark in February,” explained Mr Klein. “But March was by far our best month ever, with almost 130,000 teu handled from vessel moves.”

Gemalink now has three weekly Ocean Alliance calls, a weekly from Maersk and one bi-monthly from Cosco, all of which are transpacific services. But it has just added its first Asia-Europe express service from the UK’s Ellerman City Liners, following the success of the revived brand’s express transits from Shanghai, Ningbo and Shenzhen to Tilbury.

“We heard it could help shippers in China speed up relocation in Vietnam,” he noted. “But I cannot say if this will be short or mid-term. If carriers continue to struggle in China, then they might decide to increase the allocation given to their Vietnamese branches, allowing them to load much more export cargo from Vietnam, meaning current calls could be bigger and longer.”

Despite last year’s Covid impact, Vietnam’s ports saw a 15% volume increase during the first nine-months of the year to 18.6m teu.