Amazon has decided to switch two of its 767 aircraft leases from Atlas Air to ATSG instead.

Amazon said the decision was made to help it adjust its air network. However, a Hedge & Associates chart showing Amazon’s current network does not imply any significant network differences between Atlas and ATSG. 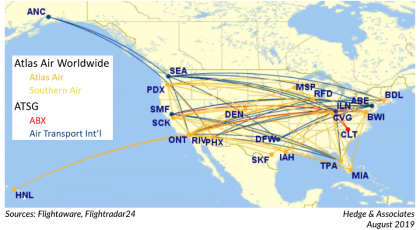 But in May, Amazon warned that if Atlas did not resolve the issues with its pilots, it could lose some business.

An Amazon spokesperson told Business Insider: “We are disappointed with the current state of relations between Atlas and their pilot union. Neither side seems willing to work towards a reasonable compromise. This is contrary to the interests of Atlas, the pilots, and the customers they both serve. We repeatedly hear claims made by the union regarding Atlas’s service for Amazon that when investigated are factually inaccurate.

“The continued inability of Atlas and their pilot union to resolve these negotiations could result in a change to the allocation of our current and future aircraft. We have an obligation to deliver to our customers, and so do they.”

The latest twist in the Atlas-versus-its-pilots dispute saw the carrier win an arbitration at the end of August, which will allow it to integrate its pilot seniority list with that of its subsidiary Southern Air. Another ruling found the pilot union to have violated its agreement with the company by refusing to follow merger rules.

However, the pilots continue to protest and the disagreements appear to be far from finding resolution. Any attempt to strike or slowdown operations in the near future could impact Amazon’s peak season deliveries.

Amazon will continue to lease 19 aircraft from Atlas companies. But this decision by the e-tailer came as no surprise to some industry observers, and could spell trouble for Atlas.

Amazon has a warrant to acquire 30% of Atlas’ stock, although they have not been exercised.