Air China has cancelled all flights to Los Angeles until 10 December, as has China Southern, according to a Chinese forwarder.

She anticipated similar moves from China Eastern, although it is expected that Xiamen Airlines would continue.

The suspensions are due to a further outbreak of Covid-19 in the Californian city, where residents have been told to stay at home.

The forwarder said Air China cargo that had already entered the warehouse would be returned.

Xiamen Airlines said it would not confirm freight rates and, if there were any discrepancies in cargo dimensions, it would be returned.

WorldACD reported that regionally, however, the Middle East and south Asia saw chargeable weight fall 8%, while North America saw a rise of 5%.

Central and South America, in the midst of the cherry season, saw capacity rise 5%, while North American capacity rose 3%.

On the eastern China to US tradelane, volumes rose 9%, but it did not affect rates, which stayed the same. Hong Kong to western Europe saw volumes rise 3% week on week, a change which also failed to move the pricing needle. 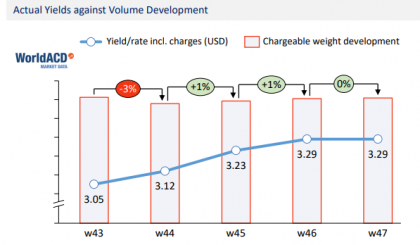 Against the odds: Kuehne + Schenker? War? Rates? – 'thanks for the firework of questions'

One of Trefzger’s last shots