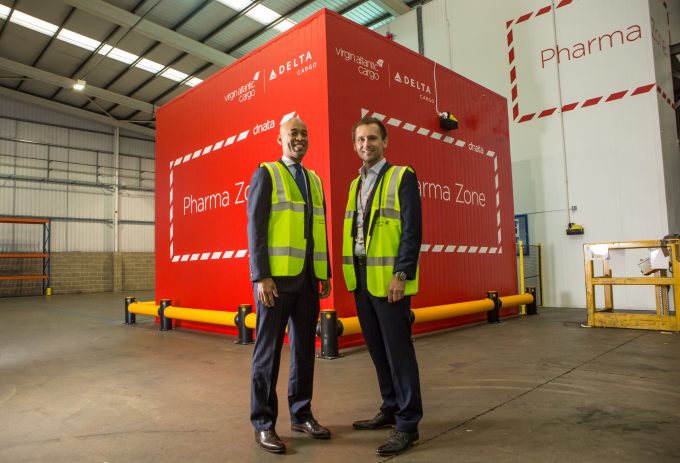 Recently appointed vice president of cargo at US carrier Delta Shawn Cole told The Coolstar the facility had been working “exceptionally well” after opening at the start of this month.

And a spokesperson for Virgin said that since opening the Pharma Zone, the carrier had received an additional 350 bookings.

The zone further cements a partnership between the carriers that began several years ago after Delta acquired a 49% share of Virgin.

“This is an exciting partnership,” said Mr Cole. “Our cultures have a great alignment, with an emphasis on customer and employee focus, and these two traits can be seen at the Pharma Zone.”

Overall, it can handle 100 tonnes of pharmaceuticals at any one time, based on a maximum of 26 pallets, each weighing four tonnes.

Good distribution practice training has also been delivered to the team working in the facility, while Delta has become the first US carrier to achieve IATA’s CEIV certification.

According to Delta, the two airlines are also responsible for handling roughly 24% of total transatlantic cargo capacity – the world’s largest tradelane for pharmaceutical products.

MD of Virgin Atlantic Cargo Dominic Kennedy said the carrier had seen an overall 20% upturn in pharmaceutical volumes over the first half of the year.

“We expect this to increase as we continue to invest in, and develop, facilities like our new Pharma Zone, as well as GDP processes and training across our network,” he added.

“In terms of our pharma and life sciences offering, we believe our size, alongside direct oversight at every single station, gives us a real advantage in terms of the agility and flexibility we can offer.”

Mr Cole said that over the next year Delta was aiming to add our other key hubs to its global pharmaceutical network, starting with New York-JFK and Los Angeles.

He added: “This network, combined with the promise of speed, consistency and efficiency in delivering high-value, time-sensitive, temperature-controlled products right across the network really is a first for the Delta Cargo and Virgin Atlantic Cargo joint-venture.”

Virgin Atlantic has continued its long-standing tradition of internal appointments with its announcement that Virgin ...