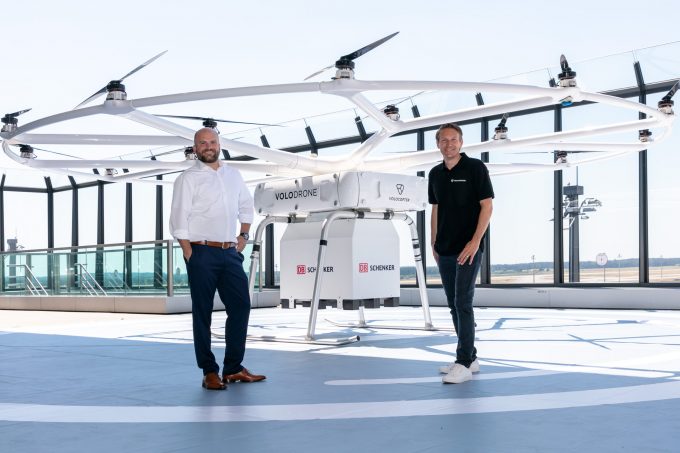 Drones and electric vertical take-off and landing vehicles (eVTOLs) are on the advance, and airports need to prepare to integrate them into their cargo operations.

At the National Aviation Conference in Berlin at the weekend, logistics firm DB Schenker and developer Volocopter unveiled the VoloDrone, an electrically operated drone that can carry loads of up to 200kg within a range of 40km.

DB Schenker CEO Jochen Thewes, who is also on the advisory board of Volocopter, said: “When the infrastructure for conventional means of transport is overburdened or non-existent, cargo drones offer an opportunity to rethink logistics routes. The possible applications in logistics are limitless.”

UPS made a splash in April with the announcement it would purchase 10 eVTOLs from Beta Technologies that could carry loads up to 635kg up to 460km, with options for 150 more.

Initially piloted, these are supposed to function autonomously in future and the integrator intends to use them to move packages to densely populated areas.

“This is the future; they can land in parking lots of shopping centres,” said Stan Wraight, president and CEO of Strategic Aviation Solutions International, adding: “Airports have to start planning for this. They have to figure out what infrastructure is needed.”

For instance, they have to determine if they need recharging areas or if the eVTOLs will need battery packs that would require a storage area away from regular storage facilities.

Edmonton International Airport has been hosting drone operations for some time, for activities like site surveillance, substrate inspections or wildlife management. However, drone operations are about to enter a new phase, with the imminent launch of a hub-and-spoke operation by Drone Delivery Canada (DDC) to move cargo between the airport and external sites.

Initially, this will involve DDC’s Sparrow drone, which can carry payloads of 4.5kg up to 30km, but the company is in the final testing stages of its larger Robin (11.3kg up to 60km) and Condor (180kg up to 200km) models. And it has plans for a drone  ten times larger, according to CEO Michael Zahra.

That said, preparations require extensive evaluation, research, safety oversight and processes to ensure the operations are safe, efficient and do not affect the aerodrome’s usual operations, he stressed.

Edmonton has been working with strategic industry and regulatory partners to ensure they understand how drones and eVTOLs can safely and cohesively operate in controlled environments, he said.

“Continuous education is key for our industry to embrace the increased presence and reality drones will continue to play in our global supply chains,” added Mr Tharakan.

While DDC is preparing for the start of its hub-and-spoke operation at Edmonton, it is also looking at new opportunities with air cargo.

“We are talking and working with other airports,” Mr Zahra said.