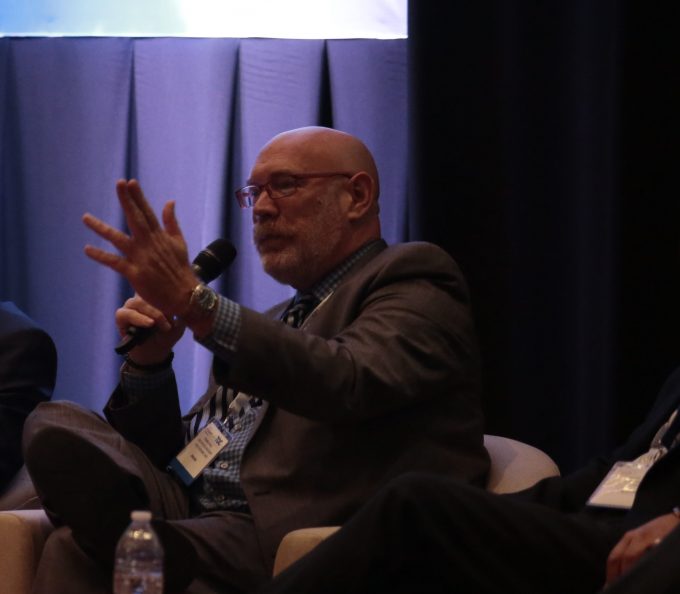 The major deepsea alliances could begin to extend their joint service network to secondary north-south trades, such as those serving Latin America, as they look to squeeze more efficiency from their cooperation agreements.

Michael Kristiansen, owner of consultancy CK Americas, told delegates at this week’s TOC America Container Supply Chain event in Panama: “I think the global alliances are coming – whether it is little by little or very fast, I think it is inevitable.”

Howard Finkel, executive vice president of Cosco Container Lines, confirmed that the Ocean Alliance – in which it partners Evergreen, CMA CGM and recently acquired OOCL – had agreed to consider “extending the geographic scope beyond the east-west trade, and especially in the north-south trades as that is increasingly becoming a focus of Cosco”.

However, most of the Latin America trades are served by a complex series of vessel-sharing agreements which cross the boundaries of the deepsea alliance memberships.

For example, according to Brazilian liner consultancy Datamar, the four services between Asia and the east coast of South America see Maersk cooperating with the THE and Ocean alliances, along with PIL, HMM and ZIM on the ESA service; while on the ASAS service, the same carriers share slots, but without Yang Ming.

Meanwhile, on the Ipanema service, Maersk and MSC cooperate with Hapag-Lloyd and MSC; and on the Sino service Cosco co-loads with PIL.

Datamar managing director Andrew Lorimer questioned whether the 2M, Ocean and THE alliances would actually be permitted to formally enter the Latin American trades.

He said: “On the east coast of South America there is no real alliance alignment and there seems to be antitrust concerns which may prevent that alignment from happening.”

And Dinesh Sharma, director of Drewry, argued that further consolidation in the Latin America trades would more likely come about through merger and acquisition activity than via alliances.

“Antitrust is prohibiting further consolidation of alliances, so there is more meaningful consolidation taking place through larger carriers acquiring niche and regional players,” he said.

However, Mr Finkel said Cosco was planning to launch a South America-North America service, even if it could not be done in association with its Ocean Alliance partners.

“We have lagged in this part of the world because it is a difficult market and not particularly profitable, but with the purchase of OOCL we have become a truly global carrier. So we will launch a new north-south service here and we will try to do it responsibly.

“We do not want to go into the Latin America market and cause havoc; we are too big for that but you will see a tremendous increase in our presence here.”

He also explained how the Ocean Alliance members were seeking to allay previous antitrust fears raised by the US Federal Maritime Commission.

“The formation of the Ocean Alliance was purely done on operational grounds – we do not discuss commercial at all. However, one of the potential advantages of the alliance was to explore cost savings through joint-procurement of services such as towage and terminals, which was something the FMC did not like the look of.

“But we still hope to be able to explore this if we can demonstrate the advantages of alliances to customers and win their support for joint procurement,” he said.