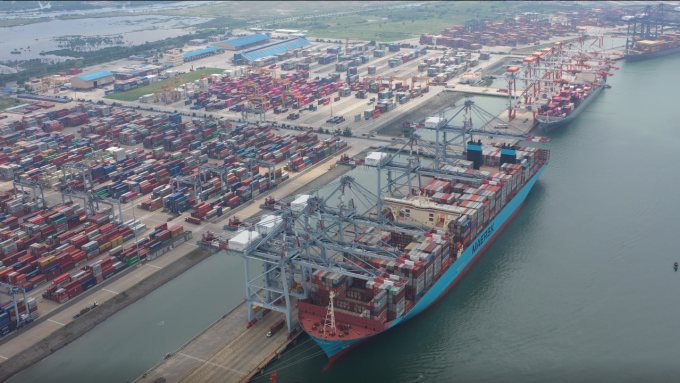 The manufacturing shift from China to Vietnam is moving up a gear, putting pressure on the country’s container supply chains.

With 2.4% GDP growth forecast by the IMF, Vietnam is on track to become one of the fastest growing economies in the world in 2020, as many others fall into lockdown-induced recessions.

For example, Singapore and Malaysia look set to suffer deep economic slumps, which would see Vietnam overtake the pair to become the fourth largest Asean economy.

Manufacturing continues to drive the country’s rise, with exports up 11% in the third quarter to $80bn.

And, according to Simon Vandekerckove, MD at Geodis Vietnam, the sourcing shift from China is entering a new phase.

“We definitely have a lot of demand,” he told The Loadstar.

“It’s not just for new sourcing, but for setting up global hubs that were originally in China – the first phase was to move orders from China to existing manufacturing facilities in Vietnam, but the feedback we have now from local OEMs, is that their existing facilities are overbooked.”

Local Vietnamese media is awash with reports of major players such as Samsung and Apple moving larger chunks of their Chinese assembly lines into the country, including higher value goods such as laptop computers, and not just smartphones.

Being next-door to China, Mr Vandekerckove said Vietnam was the “obvious choice” for companies to relocate their sourcing, as it allows them to keep some of their existing setup, whilst also benefitting from an “extremely promising” batch of FTAs – particularly the deal with the EU which kicked-off in August.

“However, we see high expectations about what overseas clients want to do in Vietnam, which doesn’t necessary have the legal nor logistics infrastructure to enable it,” he cautioned.

“Vietnam needs a lot of investment into growing new production capacity and infrastructure to cope with the increased demand, and will likely be part of a mix of outsourced locations with other Asean countries like Thailand and Indonesia, as customers want to mitigate the financial exposure linked to sourcing from only one location.”

The inner-city river terminal is notorious for congestion, but current market conditions have exacerbated waiting times, according to one local Vietnamese forwarder, who told The Loadstar export container yard space was at “120% capacity” and vessels were waiting two-to-three days for a berth.

He added: “The outbound volumes of all shipping lines at Cat Lai are sharply increased, but due to lack of space, around 10%-20% of volumes per call has to be rolled to the next vessel.”

The fast-growing deepwater port at Cai Mep-Thi Vai is lying in wait 50km away, however. The APM Terminals-operated Cai Mep International Terminal (CMIT) saw the 20,000 teu Margrethe Maersk call in October (pictured above), one of the 2M’s direct transpacific services.

The facility has had ultra-large container ships call in the past – temporarily – but current demand trends could now see the vessel-upsizing here to stay. For example, CMA CGM is due to open Cai Mep’s newest terminal next year, partnering with local player Gemadept.

Nevertheless, Mr Vandekerckove confirmed space and equipment shortages, along with sharp rate increases, were still a big challenge at the moment.

“Under freight all kind (FAK) and spot requests, it currently take two-to-three weeks to secure the equipment and space from the time of booking ex-Vietnam,” he explained, noting rates had increased as much as 140% to the US west coast, 70% to the Mediterranean and 15% to Northern Europe.

Geodis offers a priority loading service for customers in a hurry, which can cut the wait down to a week from the time of booking.

And Mr Vandekerckove said air freight wasn’t an option in most circumstances, but road freight has provided a flexible alternative for some clients.