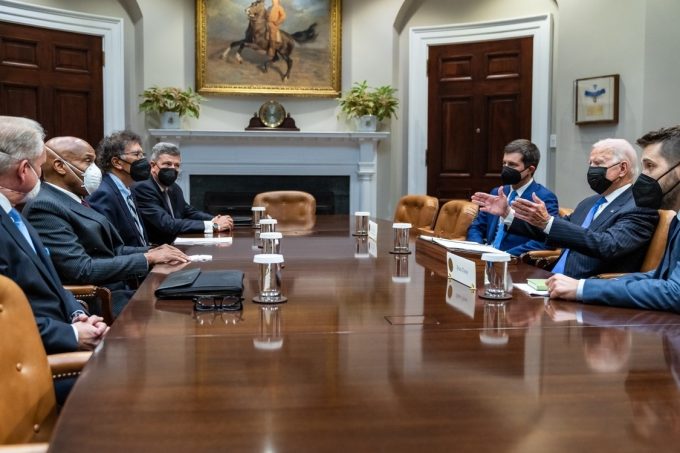 US president Joe Biden has hailed a new 24-hour working system, which he says will help to shift bottlenecks in US supply chains bringing products to market for Christmas.

But some industry observers do not share his optimism, believing the shift cannot be made so readily.

In yesterday’s meeting between the president and supply chain stakeholders, including shippers, port operators, truckers and unions, Mr Biden developed a plan to bring the US into line with other major trading nations in Europe and Asia.

Following the meeting, which included the directors of the ports of Los Angeles and Long Beach, Gene Seroka and Mario Cordero, which handle 40% of US imports, Mr Biden announced: “They’re going to help speed-up the delivery of goods all across America.”

Mr Biden said the port of Los Angeles had agreed to operate on a 24-hour, seven days-a-week basis, in line with Long Beach which has already committed to 24-hour working.

“This is the first key step toward moving our entire freight transport and logistical supply chain nationwide to a 24/7 system,” said the president.

He added that the shift would see ports operating 60 more hours a week, with evening and night time deliveries offering quicker delivery times due to the reduced traffic levels.

“So, by increasing the number of late-night hours of operation and opening up for less-crowded hours when the goods can move faster, today’s announcement has the potential to be a gamechanger,” claimed the president.

He added: “I say ‘potential’ because all of these goods won’t move by themselves.”

Mr Biden believes a commitment from companies such as Walmart, FedEx and UPS to increase their off-peak working hours by 50% will help thousands of small businesses across the country.

“The commitment to go all-in on 24/7 operations means businesses of all sizes will get their goods on shelves faster and more reliably,” he said.

However, the Teamsters union general president, Jimmy Hoffa, pointed out that one of the major challenges for supply chains had been a lack of available truck drivers.

“They are not paid a living wage and are largely treated as indentured servants. And that will continue until this country deals with the issue of misclassification which allows them to be subjugated by companies.

“If people can make an adequate wage with good working conditions, they will come to work. But that means they must be treated as employees who are allowed to organise with a union so they can negotiate proper compensation, benefits and workplace safety. Nothing will change until that happens.”

Meanwhile, CNBC presenter and transport specialist Lori Ann Larocco tweeted: “@portoflongbeach confirms only one terminal will remain 24/7 as of now. Still in process of expanding other terminals. Important to remember every single facet of the supply chain needs to be on board with this! You need manpower and equipment. No easy fix.”

Later, she added: “Breaking port news @portofLA tells me “Not one marine terminal will go 24/7 tomorrow. This [is] a process to work the details of expanded hours leading to around the clock work in the private sector. Seroka will be meeting industry associates tomorrow on this.”

One of the biggest hurdles for achieving 24-hour working is that US ports are, effectively, landlord ports, which lease terminals to operators. As a result, Los Angeles and Long Beach “are not involved with the movement or handling of cargo. Each tenant has their own sets of rules for container pick-ups and drop-offs, hours of operation, etc. There is no unity”, said Ms Larocco.

“The projected  3,500 extra containers brought in a week translates to mere 1% of the total teu  brought into the ports of LA and LB in August. Trade has turned into a political pawn for the infrastructure bill. The administration has characterised this as a ‘sprint’. I don’t think it is, if you are wearing cement ankle weights.”

Meanwhile, President Biden believes the deal he has struck with the private sector will have long and short-term benefits for the nation.

“Strengthening our supply chains will continue to be my team’s focus. If federal support is needed, I will direct all appropriate action. And if the private sector doesn’t step up, we’re going to call them out and ask them to act.  Because our goal is not only to get through this immediate bottleneck, but to address the longstanding weaknesses in our transport supply chain that this pandemic has exposed.

“We need to take a longer view that invests in building greater resilience to withstand the kinds of shocks we’ve seen over and over, year in and year out, whether it’s the pandemic, extreme weather, climate change, cyberattacks or other disruptions.”