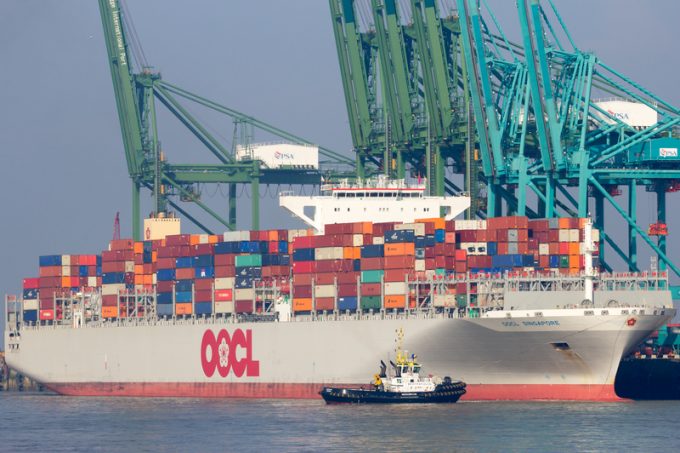 Alliance networks operating between Asia and North Europe are experiencing delays of up to a month due to worsening port congestion at both ends of the tradelane.

Asia-North Europe loops with a pro-forma round-trip transit time of around 75 days are now taking 100 or more, with carriers obliged to juggle schedules at the last minute.

According to a Maersk advisory, vessel wait times at Antwerp are already up to 10 days, with lesser – albeit significant – delays impacting all North European hub ports.

Alphaliner reports that the maiden voyage of the 23,782 teu newbuild MSC Amelia, deployed on the 2M’s AE55/Griffin service, was diverted to Zeebrugge this week due to the congestion at MSC’s Antwerp hub.

“Originally scheduled to arrive at Antwerp on 28 July, the newbuilding only called at its first North European port, Rotterdam, on 14 August,” said Alphaliner.

The consultant said the ULCV’s revised European rotation of Rotterdam, Zeebrugge and Felixstowe would now take 18 days, due to waiting times in both Rotterdam and Felixstowe, compared with its schedule of around six days.

According to eeSea data, the AE55/Griffin loop has a pro-forma round-trip voyage time of 76 days, of which 62, or 81%, are spent at sea, with 14 days allocated to time at port.

This is a common ratio for the tradelane but, due to worsening port congestion at Asian and North European terminals, time in port or waiting for berthing windows has increased substantially, to around 40% of the schedule.

Indeed, Hapag-Lloyd CEO Rolf Habben Jansen told investors and analysts last week that average voyage delay days had “tripled” in the first half of this year, compared with the same period of 2020. He said container usage days had also increased, by 16% compared with H1 20, due to boxes being stuck on ships or delayed in overwhelmed landside sectors.

“That means we need more boxes to ship the same amount of cargo, and more ships which we cannot get, to carry them,” he said.

One carrier source told The Loadstar recently his line had “virtually given up” on trying to regain schedules.

“Delays in North Europe were bad enough, but now we are facing congestion in China the schedules are shot to pieces and, effectively, they have become rolling schedules,” he said.

And with the supply chain considerably lengthened and demand remaining strong in the build-up to the holiday season, Maersk advised shippers they should “consider booking your containers at least three to four weeks beforehand”.

It added: “If you’re looking to ship promptly and to make sure your cargo arrives at destination in time for the winter holidays this year, follow our suggestion and plan your strategy up front.”

The carrier is offering shippers its Maersk Spot product with the addition of inland services, customs services and value product bolt-ons as a solution to the current acute equipment and space shortage.

It added that “if you really wish to be flexible”, shippers could also include its “rollable” and “free-time extension” products for an unspecified extra charge.