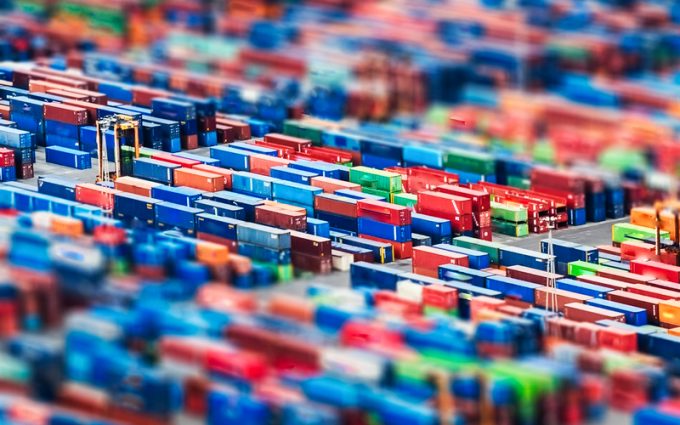 Shipping lines have slapped a raft of peak season and port congestion surcharges on Asian tradelanes.

For example, from 1 December, CMA CGM will introduce a peak season surcharge of $500 per teu from all Asian ports to Mediterranean and North Africa.

And on intra-Asia lanes, the worsening shortage of 40ft containers is driving up spot rates, Alphaliner said, noting a “spectacular” 53% increase of $253 per teu on Shanghai-Singapore last week.

Today’s SCFI saw carriers make further gains on Shanghai-Singapore, which grew another 10.2% week on week to finish at $802 per teu.

The Shanghai-Busan trade appears to have stabilised however, as rates this week dropped $7 to end at $188 per teu.

The uptick in intra-Asia rates was noted by HMM in its Q3 results, the carrier blaming the scarcity of equipment on east-west trades spreading into Asian networks.

Indeed, Otto Schacht, EVP sea logistics at Kuehne + Nagel, pointed out there were currently 15 vessels anchored outside LA-Long Beach, waiting for a berth.

“Last time we saw this was 2015,” he said. “With a volume surge, terminal capacity is at its limits. This creates equipment issues, [and] Asia desperately needs empty containers for exports. The situation will definitely not improve before Chinese New Year [in February].”

Yesterday, Hapag-Lloyd announced a peak season surcharge for China-to-intra-Asia cargo of $500 and $1,000 per teu and feu respectively, effective throughout December, claiming: “This surcharge gives us the chance to continuously offer you the service quality you are used to.”

MSC is to apply a $1,500 congestion surcharge on Europe-origin cargo from Monday, while CMA CGM has added a $1,250 charge.

A bout of port congestion in Tianjin has also resulted in carriers implementing surcharges on China imports, after Covid-19 checks on reefer cargo resulted in severe disruption to inbound operations.

While carriers blame an unexpected demand surge for the global box shortage, forwarders continue to criticise them for “profiteering over a problem they created”.

Mads Drejer, Scan Global Logistics’ COO for air, ocean, and rail said: “Container carriers introducing an array of blank sailings, especially during the initial period of the Covid-19 phase, in order to manage capacity and ultimately drive up prices, resulted in a fundamental gap in the global re-positioning of empty containers.”

And he accused carriers of “chasing short-term profits over supply chain stability by directing container equipment to trades where the highest price is available and not where equipment is needed” adding: “Consequently, 2020 is expected to be one of the best years ever recorded for ocean carriers in terms of profits.”