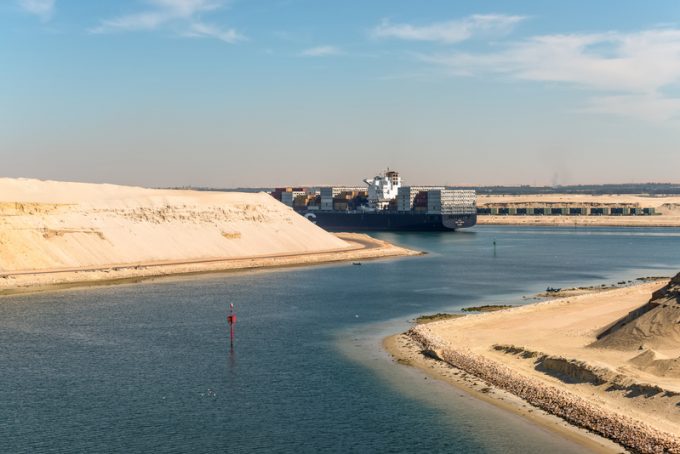 The Suez Canal Authority (SCA) is set to lose over $10m in revenue from container lines routing vessels via the Cape of Good Hope rather than its waterway.

According to new Alphaliner research, “the number of containerships that have opted to use the Cape route and bypass the Suez Canal has risen to a historic peace-time high,” including at least 20 sailings on the Asia-Europe, Europe-Asia and North America east coast-Asia trades.

“A unique combination of a container tonnage surplus and rock-bottom bunker prices has increasingly prompted ocean carriers to avoid the canal – and thus its fees,” the analyst noted today.

“Rather unusually, even three westbound Asia-Europe headhaul sailings have opted for the Cape route, all operated by CMA CGM.

“Carriers very rarely choose this longer route for the time-sensitive headhaul, but the low bunker price and lack of demand in European markets, hit by the Covid-19 lockdowns, have suddenly made such moves viable,” it added.

As well as the three Ocean Alliance westbound sailings – two on the FAL3 service and one on the FAL1 – Alphaliner tracked nine Europe-Asia and eight North America east coast-Asia backhaul sailings avoiding Suez with vessels operated by Evergreen, MSC, ONE and Cosco.

Suez Canal charges vary according to the size of the vessel, its routeing, the number of containers carried and the proportion of laden boxes, but as a rule of thumb, a fully laden 20,000 teu container vessel on a headhaul Asia-Europe sailing could expect to pay around $700,000 in transit fees.

The distance difference between the two routes is around 3,500km on Singapore-Rotterdam sailing.

In response to the moves, the SCA has announced cuts in transit fees, varying from around 17% for ships involved in European trades, to 60%-75% for vessels returning to Asia from the east coast of North America.