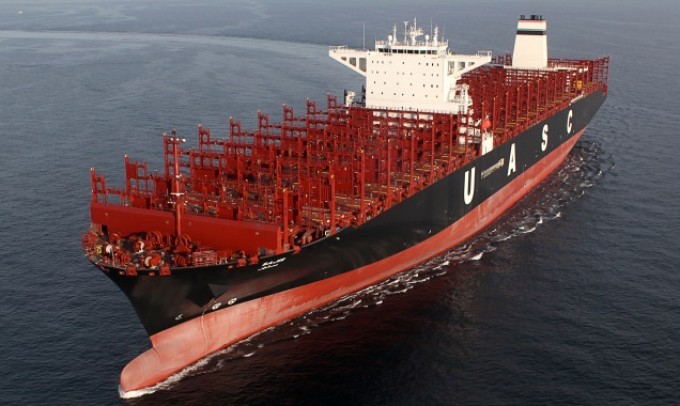 Hapag-Lloyd has taken delivery of the last of 17 ULCVs ordered by UASC in 2013 as “some of the greenest and largest container vessels in the world”.

The $2bn order was for the first “LNG-ready” ULCVs, built to mitigate the-then runaway cost of oil. However, oil prices subsequently collapsed and the conversion to LNG was no longer economically viable.

UASC claimed at the time the larger vessels would improve its competiveness on the Asia-Europe trade, and it could boost its position in other key trades by operating the smaller ULCVs on those routes.

The ULCVs were a main attraction for Hapag-Lloyd in its takeover of UASC, as the German carrier’s largest vessels were only 13,000 teu and increasingly uncompetitive on the Asia-Europe trade.

In a statement today, Hapag-Lloyd’s chief operating officer, Anthony Firmin, said: “With this newbuild, our fleet – one of the youngest and most modern in the industry with an average age of just 7.1 years – is now complete.

“We have no plans to order any more newbuilds in the foreseeable future,” he added.

In addition to inheriting the ULCVs, Hapag-Lloyd took over eight 6,920 teu vessels and ten 4,100 teu panamax ships. It has struggled to deploy the latter within its network and this week announced it would scrap three.

The carrier said they were sold on condition they were scrapped at yards in China and Turkey “specially equipped and certified for safe and environmentally sound recycling”.

It said this was a continuation of its Ship Recycling Policy which states that ships “must be recycled in a safe and environmentally friendly manner”. Shipowners normally obtain less from “middle-men” cash buyers if they stipulate which breaker’s yard is to be used, however currently demand for steel scrap is high and the differential will have been less than usual.

Meanwhile, the Al Jmeliyah will be phased into the FE4 Asia-North Europe service of THE Alliance this weekend.

The integration of UASC into Hapag-Lloyd has come at some considerable cost, evidenced by the German carrier only just scraping a profit in the second quarter and remaining in deficit for the six-month period.