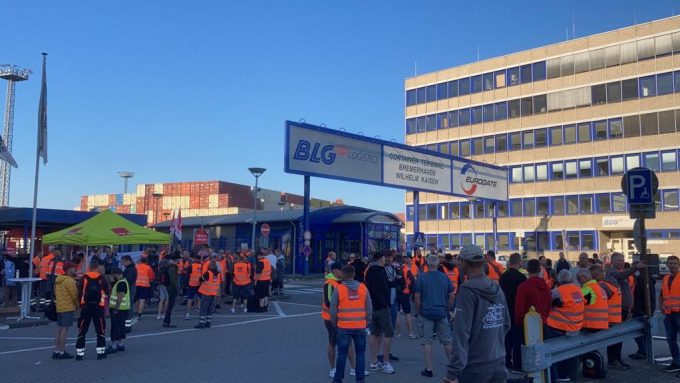 Striking dockers in Bremerhaven in June.
By Mike Wackett
13/07/2022

German dockers are set to commence a 48-hour strike on Thursday as wage negotiations with employers reached an impasse.

The industrial action by 12,000 port workers will halt operations at the key container hubs of Hamburg, Bremerhaven and Wilhelmshaven, and will be the third and longest period of industrial action in the increasingly bitter wage dispute.

If the strike goes ahead, it will have a serious impact on liner networks and worsen the already chronic supply chain congestion at North European container hubs.

The Loadstar understands that dockers will stop work at German ports from 06:00 hrs on Thursday until 06:00hrs Saturday, the nation’s longest dock strike for more than 40 years.

The ratcheting up of industrial action follows the breakdown in the sixth round of negotiations between the employers, the Central Association of German Seaport Companies (ZDS) and the trade union, ver.di last week.

“The employers are not sufficiently meeting our demand for a real inflation compensation,” said ver.di’s chief negotiator Maya Schwiegershausen-Güth.

“We need a real inflation compensation so that the employees in all companies are not left alone with the consequences of galloping price increases,” said Ms Schwiegershausen-Güth, who called an earlier offer by ZDS “a classic sham”.

However, commenting on the stalemate, ZDS negotiator Ulrike Riedel complained that the union showed “no willingness to compromise” despite “repeatedly improved offers” and claimed that it had “responded to ver.di’s demands”.

Ms Riedel said that there was an offer of “up to 12.5% on the table”, including a permanent increase of 8% backdated to 1 June.

“With this offer, we are above the very high inflation rate and far above what ver.di and other unions are demanding and concluding in other current negotiations. We cannot afford more than that without endangering the survival of companies,” said Ms Riedel.

She said that any further escalation of industrial action would be “completely disproportionate in view of this offer and harms not only us, but Germany as a whole”.

“We urgently need a conciliation procedure,” she added.

But warning that “further strikes could not be ruled out” after the collapse of the negotiations, Ms Schwiegershausen-Güth rejected the need for arbitration and called on the employers to renegotiate on the permanent increase, which she claimed could reduce to 3.5% for some sectors of the workforce.

Even before the proposed strike, yard density at Hamburg’s terminals has been deteriorating due, it is claimed, “to the negative impact of the wage negotiations”, which has resulted in a reduction in the number of extra shifts at the terminals.

Moreover, on Saturday METRANS announced that it was suspending its export trains due to the backing up of import trains, resulting in significant delays to the delivery of containers and consequent missed shipments.

Meanwhile, ocean carriers are waiting to see if there is a last-minute reprieve or intervention that will prevent further chaos for ship operations in North Europe.

“We have nowhere else to go with the German cargo,” a Felixstowe-based carrier contact told The Loadstar this morning. “Antwerp and Rotterdam are full to the brim so if it happens, we will just have to join the queue I guess,” he said.