News / Amazon container order another move toward 'dominating US logistics' 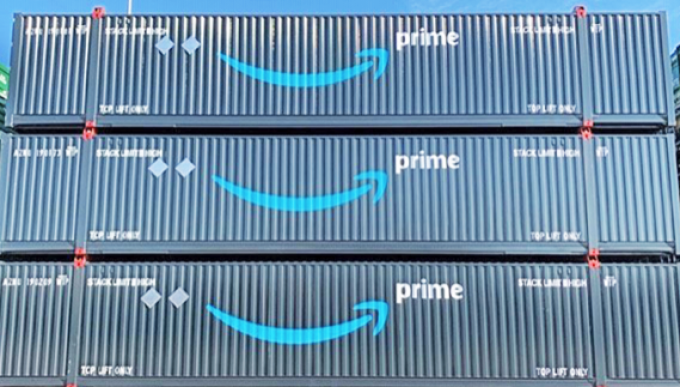 Amazon last week took delivery of the first 48 containers of its order for 250 53ft boxes, as it ramps up its domestic US network.

JOC revealed that the internet retailer had placed the order for intermodal containers as another step towards its goal of becoming a large network transport company.

According to Steve Ferreira, founder of Ocean Audit, the containers were made in Guangdong, and “probably avoided a tariff as they were landed before September 1”.

He added in his LinkedIn post: “Unlike JB Hunt’s programme of importers like Flexsteel Industries taking advantage of one-way rates of their new 53ft equipment, this Amazon equipment was empty.”

The containers are to be used on the US west coast as part of a pilot programme, a move also made by Walmart.

Walmart launched a pilot programme on rail between southern California and the Midwest last year, taking control of its own lanes to boost consistency. It also cut costs and increased margins.

Walmart told JOC it was talking to railroads about being a direct provider, but also using intermodal marketing companies such as JB Hunt. Amazon’s strategy on this is not yet clear, although it has been contacted by The Loadstar for comment.

But the air network will fall far short of what it is likely to require, pointed out consultant Alan Hedge in the Hedge & Associates’ report on Amazon Prime Air.

“The Amazon Prime Air network has grown rapidly and has chosen a hybrid between a hub-and-spoke and point-to-point network structure designed to maximise aircraft utilisation.

“Despite its rapid growth, the Amazon network is still far from providing the geographic reach of the incumbent express integrators, FedEx and UPS.

“Continued expansion will require increasing capital expenditures for facilities and run into a shortage of passenger aircraft feedstock for growing the network’s Boeing 767 converted freighter fleet.”

The e-tailer is also an NVOCC and it is likely that it will consolidate its goods in Asia, pack them into its own containers and book transport directly to the US and other regions.

“Amazon is doing everything right,” said Zvi Schreiber, chief executive of Freightos.
“It’s leveraging its near-monopoly of e-commerce buyers to create a monopoly for e-commerce sellers, and now to become a dominant provider of logistics from storage to ships, planes, trucks and now containers.
“But these market dominances, and the force they create and the challenges they pose for competition, should be addressed.”