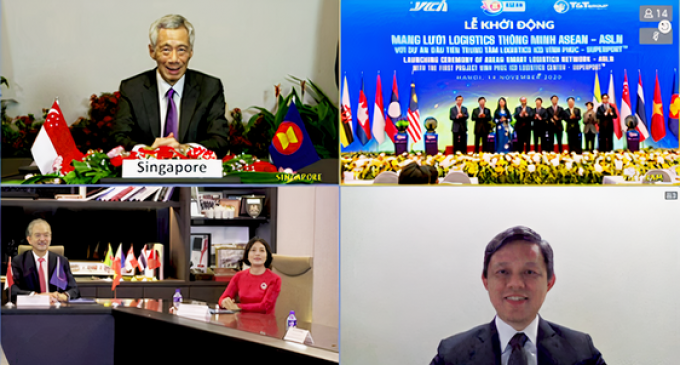 The company has called the facility its SuperPort and a “first of its kind” multimodal logistics hub, integrating a dry port and advance supply chain operations.

It claimed: “It will demonstrate the advantages of multimodal transport through its road, rail, air and sea links – road and rail linking China’s Yunnan province, Kunming city, to Hanoi and eventually ends at Hai Phong international port.”

Hai Phong has experienced speedy growth since 2018 after opening a deepsea container terminal and winning a number of mainline calls to the US.

YCH said: “With its strategic location within reach of 20 industrial parks, the SuperPort will act as a supply hub for these manufacturing operations, which have projected to grow exponentially as manufacturing activities are shifting towards Vietnam.

“There are already plans to increase and enhance YCH’s investment in Vietnam for additional warehousing and major logistics infrastructure.”

It said the SuperPort would also further enhance the Chongqing Connectivity Initiative (CCI) by connecting Chongqing and China’s western region with South-east Asia. The city is fast becoming a key multimodal logistics hub for Asean trade, with Beijing keen to upgrade the less-developed western region with better transport connectivity.

Robert Yap, chairman of YCH Group, said: “It is important for us to grow as a pack, to share our best practices and to innovate together so that we can capture the great opportunities generated by the burgeoning ASEAN economy.”

The project was announced at last week’s 37th Asean Summit in Hanoi (pictured). ASLN was initiated by the trade bloc in 2018 with the aim of boosting economic integration and supply chain connectivity between members.

Given the impact of the Covid-19 crisis on trade and manufacturing, YCH believes there is a growing trend towards regionalisation, and highlighted the Regional Comprehensive Economic Partnership (RCEP) trade deal alongside Australia, China, Japan, New Zealand and South Korea, also signed at last week’s summit.

YCH said RCEP would progressively reduce tariffs on many products as the region looked at “mitigating the negative impact of Covid-19 and maintaining open supply chains”.

Even without RCEP, bilateral China-Asean trade has bucked the trend this year and grown by 7% between January-October, according to Chinese media.