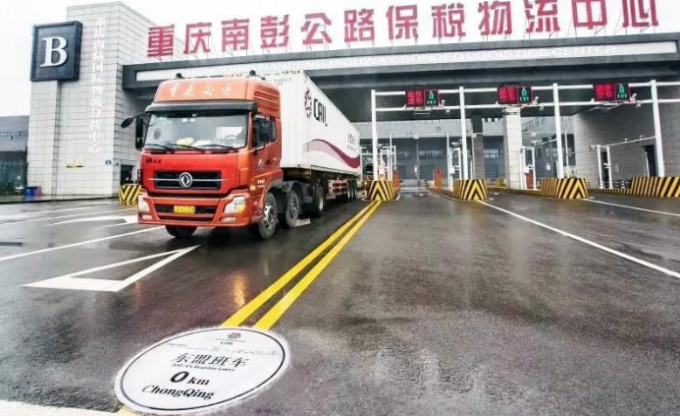 The cross-border border truck leaving Chongqing Nanpeng Highway Bonded Logistics Centre as it starts on its 4500 km journey to Singapore.
By Alex Lennane
06/03/2019

YCH claims the service can challenge air freight on transit times, with 45ft container trucks plying the 4,500km route from Chongqing to Singapore.

“Comparing, in terms of point-to-point with air freight, our shuttle service is about 60-70% cheaper and almost as fast,” said Ryan Yap, YCH Group’s head of growth.

“The cost of sea freight is still the lowest by any means of transport comparison. However, our express shuttle service is on-demand and can turn around quickly to cater for customised distribution and pick-up arrangements along the southbound corridor, therefore providing a more flexible option.”

Customers include shippers from the electronics, consumer goods, chemicals and pharmaceutical industries, according to Mr Yap, with YCH tailoring transport routes to locations in Malaysia, Thailand, Cambodia, Laos and Vietnam.

The YCH service adds to the region’s fast-developing road freight market, with many logistics firms opting to use Bangkok as a regional logistics hub for road-air and road-sea connections due to seasonal congestion issues at neighbouring ports and airports.

“The rise of affluent consumer markets in the region demand channels that are effective and greater in flexibility,” he added, noting that the rapid middle-class expansions in both China and India were creating a global economic “mega-trend” boosting e-commerce and perishable cargo flows in particular.

In China, Chongqing is fast becoming a key multimodal logistics hub for ASEAN trade, with the government keen to upgrade the country’s less-developed western region with better transport connectivity.

As well as all-land routes via road and rail, the Chongqing Connectivity Initiative (CCI) includes plans to link the Chinese city with Singapore via the Southern Transport Corridor, a rail-sea project utilising rail freight between Chongqing and Qinzhou port in the southern Guangxi province.

“Chongqing has made great strides in recent years by actively collaborating with partners such as YCH to develop a southward trade route and logistics passage,” Mr Yap said.

He said the bloc’s skilled labour and free-trade agreements put it in an ideal position to capitalise on the aftermath of the US-China trade tensions.

“There is a renewed interest in foreign direct investment into ASEAN due to rising cost pressures from the US-China trade war. Chinese manufacturers see ASEAN countries like Vietnam as an attractive base, with wages as little as a third of those in coastal regions of China.

“Countries like Thailand and Malaysia, which have ready production networks in electronics, could also easily benefit from a shift of supply chains.” 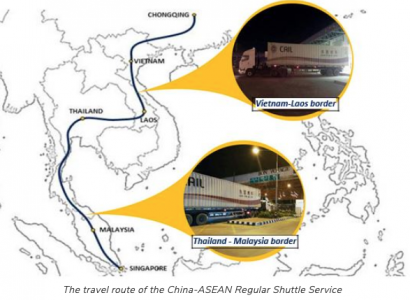 Ceva Logistics has launched a “rapid” less-than-truckload (LTL) service between China and South-east Asia. With Shenzhen ...