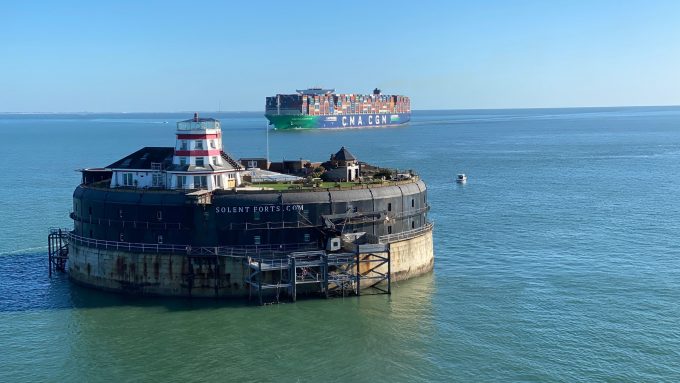 UK shippers have been hit by a further series of container shipping ad hoc capacity contractions as a number of vessels recently skipped UK port calls or reduced their time at berth.

It’s all due to continuing congestion at the country’s major container gateways.

However, amid the fanfare, it appears the vessel departed the port without unloading all its import containers, according to a customer advisory from its Ocean Alliance partner, Cosco.

“CMA CGM Jacques Saade has cut and run with import containers remaining on board – these containers will be discharged on the second call which currently has an eta of 15 November, subject to change.” it told customers.

DP World told The Loadstar that of the 4,700 UK-bound containers on the vessel, 4,600 had been unloaded.

According to the Ocean Alliance’s FAL1 schedule, on which the vessel is deployed, the ship is currently in Hamburg and due to call at Rotterdam next. The Southampton call will be next, the last outbound call in Europe before the vessel returns to Asia.

Similarly, Evergreen’s 20,400 teu Ever Grade skipped its scheduled call at Felixstowe on Saturday and headed straight for Rotterdam on the Ocean Alliance’s FAL6 Asia-North Europe service.

The company told British shippers and forwarders that UK containers would be unloaded at Rotterdam and then feedered to Thamesport – a further sign carriers are looking for alternative ways into the country – forcing importers to scramble for scarce haulage.

“We now have [to find haulage] from other side of the Thames and send trucks into Kent; how much cost, delay in transit and aggravation do you reckon that’s causing us?” one forwarder told The Loadstar.

In Freightos’ Baltic Index market analysis published today, SeaIntelligence Consulting CEO Lars Jensen wrote: “All these events shifting demand flows within a timespan of just weeks. And whereas the carriers have been adept at adjusting capacity at an equally rapid pace, there are elements of the supply chain that cannot be adjusted as rapidly.

“This is now seen in the availability of empty containers, where acute shortages are causing extreme upwards pressure on freight rates.”

Freight Investor Services head of air and containers Peter Stallion added: “The overriding driver for prices into North Europe has been availability of equipment, which has acted to, essentially, throttle capacity without the requirement for new blank sailings.

“Operations in the UK have been hit hard, with FAK+ surcharges adding thousands to the physical charges of shippers. This has had a bullish impact on forward rates, particularly in Q4, with mid-values now sitting at $2,225.

“Fundamental drivers for Asia-Europe trade don’t appear to have changed; the key market mover has been equipment being diverted to transpacific trades,” he wrote.