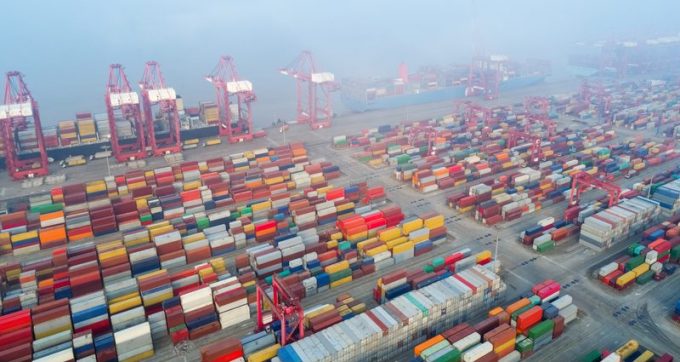 More freight delays are expected in China this week, after typhoon In-Fa forced the closure of Shanghai’s container port and airport over the weekend.

And last week, the typhoon brought devastating rainfall and flooding in China’s central Henan province, disrupting operations at Zhengzhou (CGO), a major airfreight hub for cargo carriers such as Cargolux.

A spokesperson for the airline said on Friday: “Flight delays have been experienced, but things are returning to normal. Although cargo flights are not restricted, customs processing of imports into CGO are delayed, but exports are not affected.”

However, as In-Fa headed towards the city of Zhoushan, making landfall on Sunday, it prompted the closure of Shanghai’s air, sea and rail hubs just 150km north.

According to CH Robinson, warehouses have also stopped container loading and deliveries to terminals.

The forwarder said: “Shanghai  has been closed since Friday and port operations are expected to reopen tonight around 10pm. Ningbo port was also closed on Friday, but terminals and depots are resuming this afternoon. We expect to see vessel berthing delays of four-to-six days at each port.”

Hundreds of flights from Shanghai and Ningbo have been cancelled. CH Robinson said Ningbo International, Shanghai Pudong and Shanghai Hongqiao were all closed yesterday.

“Charter flights for today have been cancelled, while some freighters are resuming later today,” the company added.

According to Metro Shipping, there is a lot of cargo stuck at Pudong, and carriers are unlikely to recover flight schedules until Wednesday. The forwarder added: “Therefore, this week’s rates have increased greatly and, even worse, the available space is very little.”

On the land side, Norman Global Logistics (NGL) said road transport across the whole region had been affected by flooding and warned customers China-Europe rail freight was disrupted by the heavy rain in Henan.

“Cargo is being re-configured to other terminals in China, but we expect it to add more pressure on the service, which already has equipment shortages and limited space.”

He told The Loadstar: “Rail, air and ocean freight are all getting delayed again, which is something we definitely don’t need at the moment.”

A new partial lockdown in Ningbo has highlighted the threat to container supply chains from ...

A Hong Kong-based unit of a UK forwarder has been chartering multi-purpose (MPP) ships to ...