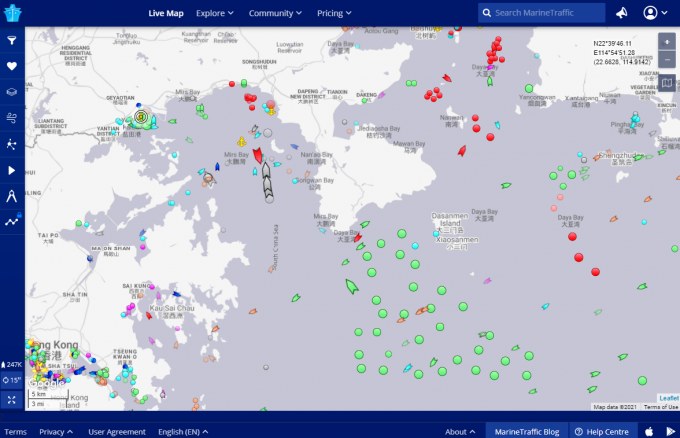 South China’s port congestion has gone from bad to worse – delays at Yantian are spilling over to nearby Shekou and Nansha.

Since then, however, multiple shipping lines, including Maersk, have blamed Covid-19 for causing the poor port productivity in the Pearl River Delta.

The company said yesterday: “The situation continues to deteriorate as more positive Covid cases have been confirmed in Shenzhen, where Yantian and Shekou ports are located, and in Guangzhou, where Nansha port is located.

Maersk said it was now expecting delays of 14 days, with productivity at berths in the western area of YICT, where mainline vessels call, still only at 30%.

Export container gate-in times have been cut to three days of a vessel’s estimated time of arrival at Shekou, and to seven days at Nansha, the latter seeing heavy traffic congestion resulting in five-hour delays for empty container pick-up and laden container gate-in, says Maersk.

“Substantial traffic jams are causing a shortage of trucking capacity, container pick-ups see delays of 10 hours or more and many hauliers require overnight time for haulage, storage and lifting, adding to costs.”

According to the latest AIS data from MarineTraffic, there are currently 36 vessels with a reported destination of Yantian at anchor, including 33 cargo ships. And with no sign of the situation improving, shipping lines have massively increased the number of Yantian port omissions.

Lars Jensen, CEO of Vespucci Maritime, said Hapag-Lloyd’s list of planned port omissions for Yantian over the next four weeks had quadrupled to 16, compared with just four only a few days ago. And he noted that Maersk’s advisory yesterday listing 40 vessel arrivals affected by the congestion was “quite an escalation” from just three days ago, when the shipping line said “several” vessels would be impacted, with cargo shifted to alternate sailings.

Given Yantian’s throughput of 13.3m teu last year and the current drop in productivity claimed by Maersk, Mr Jensen estimated there was around 25,500 teu a day the port had been unable to handle since the crisis began.

“Putting this in context, when Suez was blocked by the Ever Given, it impacted a daily flow of 55,000 teu. But that ‘only’ lasted six days. In Yantian, we are at 14 days and counting –and there is the impact on Nansha and Shekou,” he added.

“Every day increases the backlog of cargo. Once the ports re-open to normal operations we should expect a surge of cargo – at least to the degree there are even vessels available to handle this. This in turn will cause ripples of potential congestion at destinations with a lag time of some two-to-five weeks.”