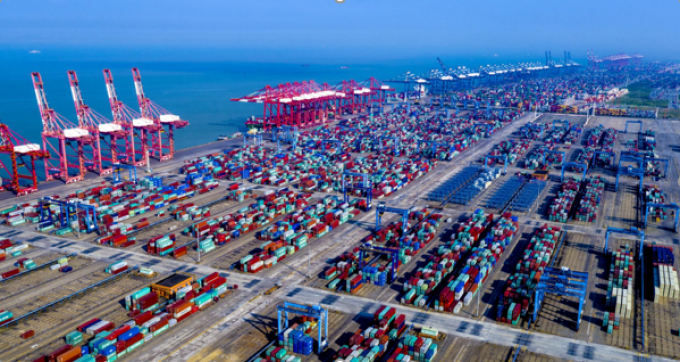 The positioning of Guangzhou’s port of Nansha in the Greater Bay Area of South China is gaining importance.

While the GBA accounts for 4.5% of the Chinese population, it produces about 9.5% of the country’s GDP and is responsible for more than 16% of foreign investment and almost a quarter of China’s foreign trade. 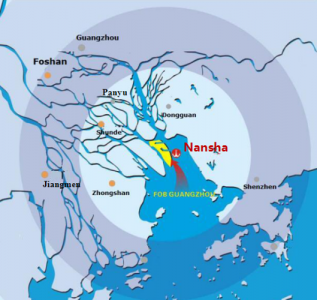 The GBA is also taking a different developmental direction. Where Hong Kong, at the end of the last century, was not only the financial centre, but also the trade and logistics centre, we’ve subsequently seen the remarkable growth and development of Shenzhen as a special economic zone in China. Shenzhen, which initially focused on joint-ventures and production, has now grown into a Tier 1 city with 15 million inhabitants, moving into hi-tech, Fintech and service industries.

Transformation in the GBA

At the same time, we are seeing a transformation of production and logistics activities.

Guangzhou and Shenzhen are transforming their local economies in consumer and service industries as well. With large numbers of consumers around the Pearl River Delta, imports of goods, especially frozen and fresh foodstuffs, beverages and branded consumer goods, have grown consistently, with double-digit figures over the last few years.

A major factor helping the GBA to grow consistently in all directions is the developing infrastructure, connecting it with the inland provinces; but also, crucially, making infrastructural connections within the area so that it can truly develop as a metropolitan region, like some of the famous Bay areas in other parts of the world, like New York, Tokyo or San Francisco.

Within the GBA, all major cities are now connected via high-speed, high-frequency trains, making it possible to travel within the GBA from every major city to another in less than an hour.

The Hong Kong Macau bridge-tunnel connection is a key part of the GBA masterplan.

Originally Hong Kong was the major deepsea port of the Pearl River Delta. Huangpu was, in the early nineties, also a direct port of call in the major trades, although quite far up the Pearl River. But in most trades, the size of the vessels did not surpass 2,000 teu, making Huangpu an ideal port for north-south trades and intra-Asia.

In the late nineties, we saw the growth of the Shenzhen ports. Increasing amounts of Chinese business could ship directly from the mainland onto the mother vessel, while Shenzhen’s draught is deep enough to accommodate vessels in the large east-west trades.

Over the past 10 years, we’ve seen the size of vessels in both the east-west trades, and the north-south trades further increasing. With this and the transformation of exports, especially towards the west side of the Pearl River Delta and the inland provinces, volumes at the Shenzhen ports are starting to stagnate, and Hong Kong volumes are falling – but there are growing numbers now at the Western Pearl River Delta.

At the same time, with the growth of imports and distribution functions, more space is required for warehousing, preferably in Free Port or bonded areas.

Nansha, the only deepsea port on the west bank of the Pearl River Delta, has become the fastest-growing port in South China in the last few years. The growth is both export- and import-driven.

While it was originally the major port for the Africa trades in South China, over the last few years it has established direct calls in the transpacific, North Europe and Mediterranean trades.

It is also an increasingly important hub in the intra-Asia trades, especially with South-east Asia, Taiwan, South Korea and Japan.

And with its value-added hub distribution function for major petro-chemical volumes, the frequency of the Middle East trades has also increased.

The port of Nansha has several big projects to be delivered in the coming year, including a direct rail link with the Chinese rail network, making Nansha the only deepsea port in the Pearl River Delta with an on-dock terminal rail connection.

It’s connecting an 88km cargo rail link, with a designated speed of 120 kph, between Guiyang-Guangzhou, Nanning-Guangzhou and Liuzhou-Zhaoqing; an integral part of the Belt and Road initiative.

It also finished its key channel-widening project in August this year, allowing two mega-size vessels to pass each other on the way to and from the port.

The widening initiative, labelled a “No 1 Project” to make Guangzhou port an international shipping hub, will put an end to the one-way navigation for large containerships between the Guishan anchorage and port of Nansha area.

“Guangzhou port will continue to improve its services in accordance with the deployment of the Guangzhou International Shipping Hub construction. We’ll make full use of the new advantages of newly built channels to improve port service efficiency, reduce integrated logistics costs and strengthen integrated transportation hub functions, as well as jointly build coastal connections with customers,” said Mr Li, chairman of the board of Guangzhou Port Group.

Serving the growing fresh and frozen goods business, the port of Nansha will have the largest temperature-controlled warehouse, to be delivered in Q1 21. Consisting of 150,000+ sq metres, it will be connected with the terminal, and in the Free Trade Zone.

Not only has the port invested in infrastructure and strategic development, it is also the only GBA port that has comprehensive sea-rail-air-road connectivity. It has also invested in its management functions, including 24/7 customs and inspection services, greater automation in processes and making the port more user-friendly.

Overall, there is a very dynamic picture in the South of China, mirroring trends throughout the Chinese economy. We are seeing relatively new ports like Nansha growing and taking over from more established names such as Hong Kong, or some of the Shenzhen ports, and not only focusing on exports, but also developing infrastructure for imports, hub functions and multimodality.

With its special focus on transportation, infrastructure and logistics, in an environment as dynamic as the GBA, Guangzhou’s port of Nansha is perfectly positioned to become one of the major shipping and trade centres of the South China powerhouse that is the GBA.

In the aftermath of the Yantian port congestion crisis, South China container trades could be ...