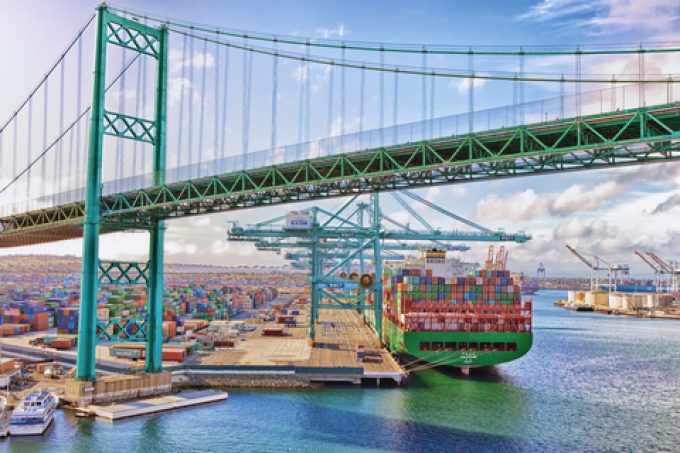 The port of Los Angeles will suffer “permanent” volume losses from the trade war with China, says its executive director, Gene Seroka.

The ex-APL shipping veteran slammed the tariffs on Chinese imports and warned that the western hemisphere’s largest container port would need to reinvent itself.

“We’ve had two bad shocks to the supply chain,” Mr Seroka said during a MarineTraffic webinar on Tuesday.

“The first, the ill-advised tariff policies of our administration in Washington; and then, to add insult to injury, the shuttering of the American economy in response to Covid-19.”

Importers began to run up inventories ahead of tariff milestones last year, said Mr Seroka, with the resulting duties “paid by no one else but American companies importing goods from China”. And China’s retaliatory tariffs resulted in 14 consecutive months of export declines.

“So what this trade policy did was increase imports, decrease exports and widen the trade gap with China,” he said.

Pointing out that it had taken Los Angeles a decade to recover volumes to pre-2008 levels after the financial crisis, Mr Seroka said the combination of the trade war and pandemic would result in a similar uphill climb.

“[Because of the lockdowns], we are discarding dairy products, culling our livestock and perishable commodities are wilting on the vine. So we need to get folks back to work as quickly as we can.”

The drive to get back to work includes LA’s container terminals, where Mr Seroka said there had been a corresponding decline of around 19%, year on year, in both volumes and dock worker shifts.

“We’re mustering all efforts to help reopen our farm communities, manufacturing sector and automotive business, among others, but this will have a lasting effect. And it’s my view that here in the US and specifically Los Angeles, because we have a high China content in our book of business, we will permanently lose 15% of our imports that come through this gateway.

“Because, make no mistake, this will not be a v-shaped recovery in the US. We see the knock-on effects of both of these issues lasting until at least the end of this year and into 2021.”

Nevertheless, Mr Seroka believes, the port has an opportunity to reinvent itself by “focusing on exports and greater container logistics efficiency” through a nationwide port community system.

“The silver lining may be, as imports go in different directions and away from the west coast seaports and specifically southern California, we have an opportunity to focus and over-invest in the US export market. This may give us a better balance of trade,” he explained.

“We need to advance ourselves digitally in order to get container truck and rail services to those rural communities of agriculture and manufacturing quicker than we  would do in a siloed effect.

“If we can extract that empty repositioning cost – landside and ocean – we may be able to do some things a little bit differently to lower our costs and become a more attractive gateway,” said Mr Seroka.