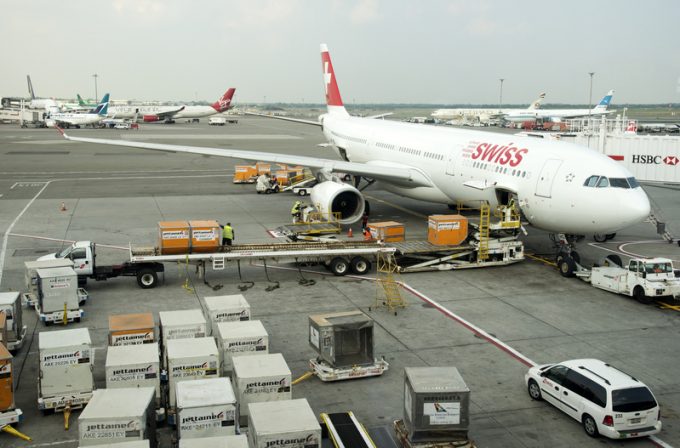 Major US hubs such as JFK have been congested © Peter Titmuss
By Ian Puztger, Americas correspondent
07/08/2020

Payment platforms see a role beyond their core function, and are helping alleviate congestion at busy air freight gateways.

Despite a double-digit drop in throughput against a year ago, airports have been struggling to cope; last month, forwarders reported delays in collecting cargo at Chicago, Los Angeles, New York JFK and Dallas/Fort Worth.

“Before, everybody had regular belly freight. Now you have full charters with a lot of cargo coming into the facility,”

He added that handling personnel had struggled to find shipments in the warehouses.

This is where firms like CargoSprint could help reduce congestion by providing better visibility on shipments, he added.

Better visibility through technology has improved in the air cargo industry, according to Lionel van der Walt, president & CEO for the Americas at PayCargo, a platform for moving money and remittance information between vendors and buyers.

“One of the silver linings of Covid-19 is that firms have been forced to bring in digital processes to enable people to work from home,” he said.

He said in response to widespread shutdowns in March, PayCargo launched a free communication mechanism for its users to share information. According to Mr van der Walt, one of the big challenges for airlines was to communicate the rapid changes in schedules and capacity in a timely manner to their clientele.

Airlines feed their updates into PayCargo’s system, which distributes them at certain times to all users.

“We see more and more truckers come into the system,” Mr van der Walt reported. “With Covid we’ve seen a blurring of the rules and it’s driven a lot of payers to become vendors. It is becoming an ecosystem, with 19,000 plus registered players in the system.”

CargoSprint has targeted the landside interface for some time. More than two years ago it developed SprintPass, a slot booking management system that allows forwarders and their truckers to book pick-up and delivery slots at airport warehouses.

Front counter staff on the SprintPass system can see the status of a shipment and allocate a slot for pick-up. They can then prepare the documents ahead of time, while the system checks that the shipment is in the designated location in the warehouse..

“A lot of congestion occurs when people wait for documents to be ready,” Mr Menini said.

The system has a number of features, such as showing drivers how many other vehicles are in line, which is particularly helpful if a run to the airport involves stops at multiple warehouses. An upgrade late last year added more functionality, such as the ability to spot a duplicate master air waybill.

The development of SprintPass evolved out of a growing engagement with truckers and more awareness of the issues they were facing. Down the road ,the journey will lead beyond the air cargo sector, said Mr Menini, adding: “Eventually we’ll do ocean, but we want to home in on airfreight right now.”

PayCargo has made no formal decision on the future of its communication mechanism, said Mr van der Walt, but he added: “We have no plan to do away with it. From my perspective, there’s no reason not to keep it. We’ve had forwarders ask if they could use the system.”

In recent months the company has formed partnerships with airline IT providers like Unisys and iCargo. These may set up functionality like an automatic check-in the warehouse about the location of a shipment when a pick-up is scheduled, he said.

PayCargo has also teamed up with Kale Logistics, which operates the cargo community system (CCS) at Hartsfield Jackson Atlanta International Airport and CargoSprint is not averse to dealing with community platforms either.

“CCSs are a great concept. Some have reached out to us to come on board,” Mr Menini said.

Billund Airport has outlined its plans for its future, and said it will consider a ...