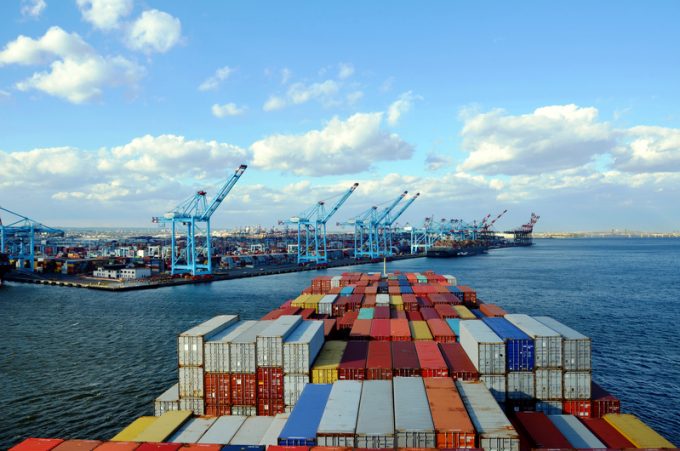 Today’s Shanghai Containerized Freight Index (SCFI) shows a further 10.65-point gain in its comprehensive index to 1,448.87 – 71% higher than at the end of May.

The huge increase over the past five months, in the midst of the pandemic, has been driven by substantial gains in container spot rates across both main and secondary tradelanes.

For example, on the secondary routes of Asia to Australasia, Asia to South Africa and Asia to Latin America, spot rates have spiked by 94%, 155% and 328%, respectively.

And on the main Asia-Europe and the transpacific east-west trades, carriers servicing the routes removed significant capacity at the start of the pandemic, but demand bounced back much sooner than expected, and rates skyrocketed in the scramble to secure space.

Carriers have mostly reinstated the blanked sailings and added extra loaders to cover peak season demand, which, at the start of the lockdowns looked very unlikely to feature at all this year.

Alphaliner reported this week that Asia-Australasia carriers had added weekly capacity of 7,200 teu in new loops in the past month, in addition to deploying several ad hoc and sweeper sailings.

Meanwhile, spot rates from Asia to the US, recorded by the SCFI, were stable this week, at $3,841 per 40ft for the US west coast and $4,619 per 40ft for east coast ports, as carriers postponed planned mid-month GRIs (general rate increases) in the face of pressure from Chinese and US regulators.

However, given the continuing strong demand, carriers will look to roll out another GRI next month. Hapag-Lloyd said this week it would defer the introduction of its whopping $1,200 per 40ft GRI until 15 November.

Commenting on the situation for US importers, Jon Monroe of Washington state-based Jon Monroe Consulting, said spot rates had spiked to around three times higher than the contract rates enjoyed by the big retailers. But he suggested that even household name retailers were “feeling the pain” as their containers that fell outside the contract had incurred “the incredibly high FAK ocean freight rates”.

Elsewhere, the North Europe component of the SCFI eased back, by $65, this week to $1,084 per teu. However, spot rates are 86% higher than a year ago, with anecdotal reports to The Loadstar suggesting rates could go up again in the coming weeks as equipment and space availability was still “tight”.

On the Mediterranean route, the SCFI ticked up a further $38 per teu this week, to $1,239 per teu, some 40% higher than the rate recorded in May.

Although space availability on sailings from Asia to Europe has improved since the Chinese Golden Week holiday, an acute shortage of equipment, particularly 40ft boxes, remains a major problem.

“If you can get a vessel booking there is no guarantee that the carrier will have an available empty at the depot,” one Shanghai-based NVOCC told The Loadstar this week.

And Ryan Clark, co-owner of UK-based forwarder Westbound Logistics, said that there were still major problems in the supply chain.

“Space is still an issue. We’re getting boxes away but rollings are rife,” he said. “We’ve also been massively affected by clients’ boxes being diverted and delayed via Felixstowe. One customer this morning doesn’t want to pay for his import because an OOCL vessel has changed ETA four times and been delayed by three weeks.

“Yet another example of the fires we’re constantly having to put out.”