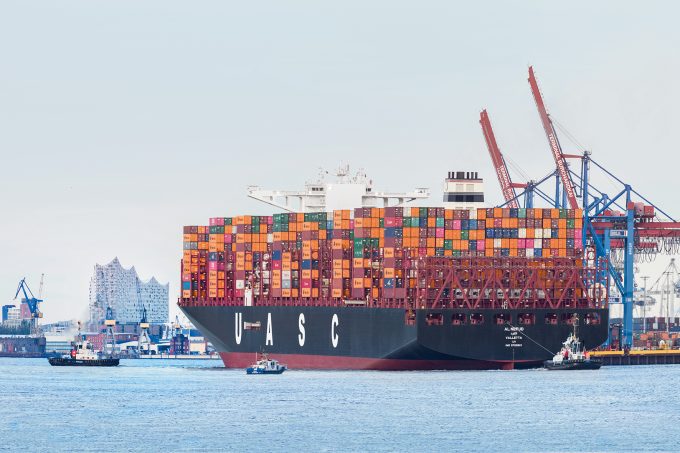 Hapag-Lloyd has confirmed an order for an additional six LNG-powered 23,500 teu ships for delivery during 2024, declaring an option on its order for six ULCVs in December.

The order for the South Korean shipyard of Daewoo Shipbuilding & Marine Engineering (DSME) will be financed via a “syndicated green loan” for the amount of $852m with a 12-year maturity from the date of delivery.

DSME’s filing on the Korea Stock Exchange states that the full price to be paid by the carrier for the six ships is just shy of $1bn, making the unit price around $166m.

Michael Kastl, managing director treasury & finance at Hapag-Lloyd, told The Loadstar: “LNG is reducing carbon emissions by 15-25% and emissions of sulphur dioxide and particulate matter by more than 90%. It is our objective to reduce methane slip to the largest extent possible.

“Hence, our 12 new ultra-large dual-fuel container vessels on order will be propelled with one of the most efficient high-pressure engines and tank capacities where methane slip on the ship is reduced to a bare minimum (studies confirmed that the methane slip ‘tank to wake’ is less than 1.5% of CO2 equivalents).

“We see fossil LNG as bridging fuel towards bio methane or synthetic LNG, which those vessels would be ready to use. We also understand from most recent announcements that the gas industry has formed a number of global initiatives, including operational targets, to reduce methane emissions from the production of oil and gas. As an example Shell, is committed to reduce the upstream methane slip emissions down to 0,2% by 2025.”

According to Alphaliner, Hapag-Lloyd has secured a good deal from DSME.

“Compared with today’s escalated newbuilding prices, this is actually a bargain for an LNG-powered ship of this size,” said the consultant.

Indeed, according to Vesselsvalue data, the market price for comparable ships of this size not equipped to run on LNG is about $200m. And asset values are soaring with, for instance the one-year-old 24,000 teu HMM Rotterdam showing a current online valuation of $209m.

Hapag-Lloyd posted a net profit of $1.45bn for the first quarter of the year, compared with just $27m for the same period of 2020, but CEO Rolf Habben Jansen blamed “a shortage of available vessels and boxes to cover the increased demand” for not reporting even better results.

He said the carrier wanted “to meet the persistently high demand and reduce our slot costs” and added: “With this investment in the additional newbuildings, we want to take another step in the ongoing modernisation of our fleet, in terms of both ship size and sustainability.”

Like some of its liner rivals, Hapag-Lloyd has opted for the ULCVs to be powered by dual-fuelled engines having the option to switch from gas to low-sulphur fuel.

“We don’t see a very good alternative at this point in time, and it definitely is a step ahead compared with what we have today,” he said.

Alphaliner speculated that either ONE or Yang Ming would shortly announce an order for six ULCVs, marking its third Asia- North Europe string having a fleet of homogenous ships.

Hapag-Lloyd is the largest partner in THEA and, with a fleet of 259 vessels (of which 115 are owned) for a capacity of 1.8m teu, is ranked fifth in the carrier league table.