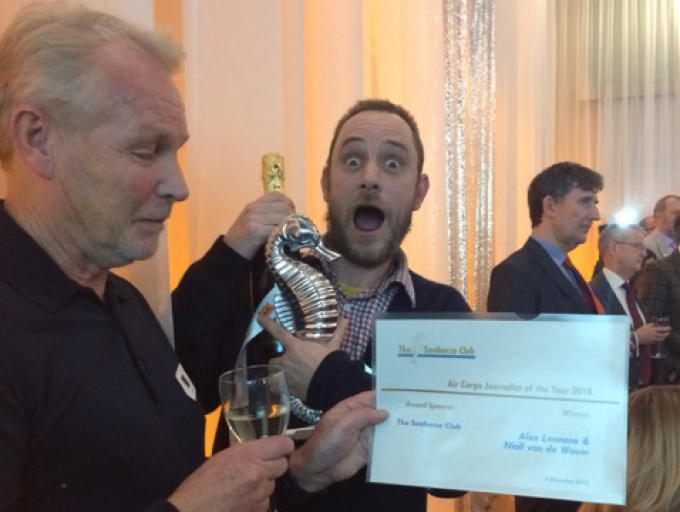 The Loadstar is celebrating today after it won four gongs at the Seahorse Awards for Journalism last night, including International Editor of the year and Air Cargo Journalist of the year.

The Loadstar also won runner up awards in both the News, and Feature Journalist of the year categories.

International Editor was won by managing editor Gavin van Marle, whose entry pointed to rising readership numbers and a wider and more diverse subject matter, which has attracted freight, technology and logistics executives to the website.

“2018 has seen The Loadstar stamp its mark on both technological and financial analysis of the freight market – both of which are critical in supporting the freight industry in breaking free from its ‘hidden’, traditional and, frankly poorly financed past.

“By pointing the focus at finances, private equity involvement and investment, as well as strategy and digitisation, The Loadstar has tried consistently to support the freight and logistics industry in its inevitable evolution towards the modern era,” said the entry.

Niall van de Wouw shared the Air Cargo Journalist award with Alex Lennane, for his work on Project Selfie, which recalculated the way aircraft load factors are measured to give a far greater degree of accuracy.

His findings, based on data from nearly a quarter of the global fleet, gathered in just eight weeks, showed a 27% discrepancy between his findings and the figures commonly used by the industry.

“It is a miscommunication to the outside world,” he said when the figures were revealed.

“Why lead people to believe planes are only half-full when rates are sky-rocketing? It is time we measured ourselves against a metric that appreciates our industry’s unique characteristics, and not against a derivative measure from the passenger industry.”

This morning he added: “I want to thank all the participating airlines who supported our initiative by sharing their data with us. We are still working with airlines to improve the industry’s load factor metrics.”

Runner-up for News Journalist was won by The Loadstar’s financial commentator, Alessandro Pasetti, for his revelations on AP Møller Maersk’s new structure.

And Sam Whelan, Asia correspondent, was runner-up in the Feature Journalist category for his Loadstar LongRead on Chinese Logistics.

The Loadstar editor’s entry added: “As technology, collaboration and data-sharing become more important, so is the ability of companies to merge more seamlessly with their suppliers and customers – and this is what The Loadstar aims for.

“Perhaps most of all, we like being read. We admit when we make a mistake; we enjoy breaking stories; we like making the market think; we like challenging the industry to do better, in a readable way, through nice design, good writing, accessibility and great stories.”

The Loadstar would like to thank the judges, sponsors and PortCare, which organises the awards.

Journalist of the Year Nick Savvides joins The Loadstar

The Loadstar is delighted to announce that Nick Savvides will be joining the team as ...

Dear friends, colleagues, readers,  In just two weeks, The Loadstar team will undertake the 24-Peak Challenge on behalf of ...

In July, an intrepid Loadstar team will undertake the 24-Peak Challenge on behalf of Seafarers UK, the ...

The Loadstar is delighted to announce the appointment of Nick Marsh as its chief revenue officer.    Nick was ...

Dear readers, We are thrilled to announce the addition of Aongus Buckley and Hessel Verhage to our fast-growing Loadstar Premium ...

It's moving day: The Loadstar is now at theloadstar.com

The Loadstar has moved! You will now find us at www.theloadstar.com.  However, we are having a few ...