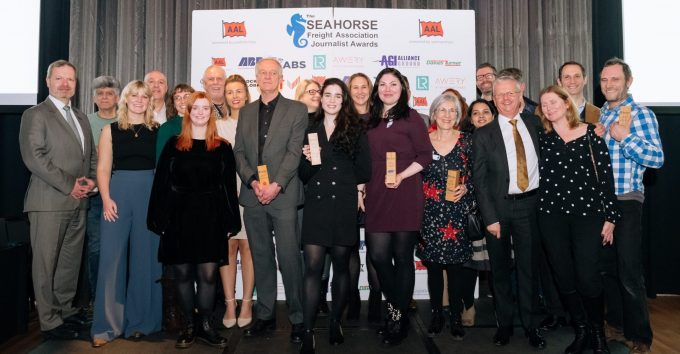 Loadstar Premium won itself a gong at this year’s prestigious Seahorse Freight Association annual (although due to The Covid, it was last held in 2018) journalism awards, with Premium writer Gavin van Marle named Supply Chain Journalist of the Year for a series of articles exploring the complex relationships between supply chains, finance and economics.

In addition, The Loadstar news editor Nick Savvides was ‘highly commended’ in the Overland Journalist of the Year category for his investigation into onerous detention and demurrage charges being levied by shipping lines on forwarders in Pakistan and Afghanistan.

The association also awarded its Personality of the Year award to Valeria Ihnatenko from Antonov Airlines, and its Lifetime Achievement Award to Portcare International’s Peter Owen, a past chairman of Seahorse.

The Loadstar would also like to place on the record its personal thanks to Mr Owen, who was a key advisor to its founders a decade ago, when they were developing their business plan.

“It is great to be back after four years, and we are so pleased to have received over 120 high-quality entries from journalists all over the globe specialising in different sectors,” said Emma Murray, Seahorse chair, and founder and CEO of Meantime Communications.

“But we must not take that great reporting for granted. It is time we energised as a community to actively encourage the next-gen of writers to join our industry,” she added.

Ms Murray said the association, which recently registered as a not-for-profit organisation run by a new committee, was inviting ideas to help encourage new reporters to join the industry, including the establishment of a bursary to fund the annual costs of an intern at a freight publication.

The awards were judged by 22 industry professionals from across the globe and drawn from all transport modes, as well as supply chain, technology, public relations, and journalism. The panel included a 50:50 split of men and women, and a range of ages and experience.

The independent judging panel did not include any sponsor representatives, and no Seahorse committee members took part.

“We hope that by including so many different professionals, we have not only ensured a robust and fair judging system, but also shone a light on the incredible and diverse industry we work in and, by doing so, helped to inspire young professionals already in the industry, or curious about joining,” said Ms Murray.

Journalist of the Year

Personality of the Year

News Journalist of the Year

Feature Journalist of the Year

Air Cargo Journalist of the Year

Maritime Journalist of the Year

Overland Journalist of the Year

Supply Chain Journalist of the Year

Technology Journalist of the Year

Rising Star of the Year

Four trophies for The Loadstar specialists at Seahorse journalism awards 2018

The Loadstar is celebrating today after it won four gongs at the Seahorse Awards for ...