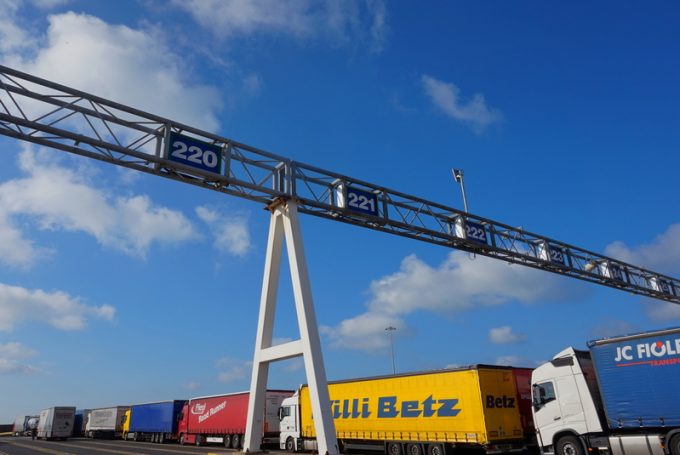 Europe’s ‘no-deal’ contingency planning has extended a lifeline to anxious hauliers of a six-month delay on the need for driver permits, in exchange for UK reciprocity.

The olive branch comes just a day after Europe allocated 1,600 European Conference of Ministers of Transport driver permits (ECMT) to the UK, leaving more than 8,000 truckers uncertain how they would move goods around a post-Brexit EU.

He said: “Good news as [there are] not enough permits. But it needs the UK to reciprocate.”

Acknowledging haulier anxieties, the EC said it was “evident” that relying solely on the ECMT quota would lead to severe disruption in the event of a no-deal, and added: “It does not constitute an adequate solution to ensure basic road freight connectivity immediately after the transition, with carriage of goods by road between the UK and member states almost entirely in the hands of haulage operators.

“The loss of their right to provide road freight transport between the UK and the union would therefore result in serious disruptions, including in respect of public order.”

It announced it would be willing to waive the need for ECMT permits for UK hauliers, providing this conformed with relevant EU transport law and the UK extended the same rights to EU operators.

European policy manager at Logistics UK Sarah Laouadi stressed that this “welcome safety net” was reliant on it “coming in time”, adding: “Six months is not a very long time in business and, for our members, it is vital negotiators return to the table to work out a free-trade agreement between the UK and EU to ensure the security of their businesses and livelihoods in the years to come.”

The proposal was part of a wider package of contingency plans the EU has should the two sides fail to reach a trade agreement by the end of the transition period on 31 December.

But the government’s failure so far to formally accepting the proposal has caused concern that reciprocal free movement for European hauliers will not be given, the prime minister’s spokesperson telling reporters the UK had its own contingencies.

One reason for the holdout may be tied to clauses concerning assessment of reciprocity, which the commission said, if not met would empower it to “adopt necessary measures to correct the situation by means of delegated acts, including the limitation to the allowable capacity available to UK road operators or to the number of journeys, or to both.”

It added: “Assessment of the level of equivalence and adoption of corrective measures are not solely linked to strict, formal correspondence between the two legal orders. This is because of the marked differences between the respective markets, and in order to avoid a blind mirroring approach which might, in the end, prove counter to the union interest.”

One source told The Loadstar the delay on ECMTs would “certainly help in the case of no-deal”, but said: “I don’t believe the UK would have mandated ECMT permits for EU hauliers, who make up more than 80% of trucks crossing UK borders, because supply chains and the broader economy would collapse if tens of thousands of trucks were denied access.

“And I reckon the quid pro quo, the idea that the UK must commit to a ‘level playing field’, is unacceptable to a vocal portion of the UK government.”

Around 43% of UK exports went to the EU last year, generating some £294bn ($387bn), while 52% of imports, valued at in excess of £373bn, come from EU member states. RHA CEO Richard Burnett said ‘no-deal’ and reliance on ECMTs would hit these figures hard.

“In the event of no-deal, we hope reassurances we’re getting from government to have a six-month glidepath in place to provide similar access as that we have now are real,” he added.

“The way we do business with the EU will change from 1 January. If UK hauliers still have to rely on a permit ‘lottery’ to access mainland Europe, the return on their business will not meet the investment. It’s inevitable that many will throw in the towel.”

You can find more detail on the EU’s contingency plans on BIFA’s website.