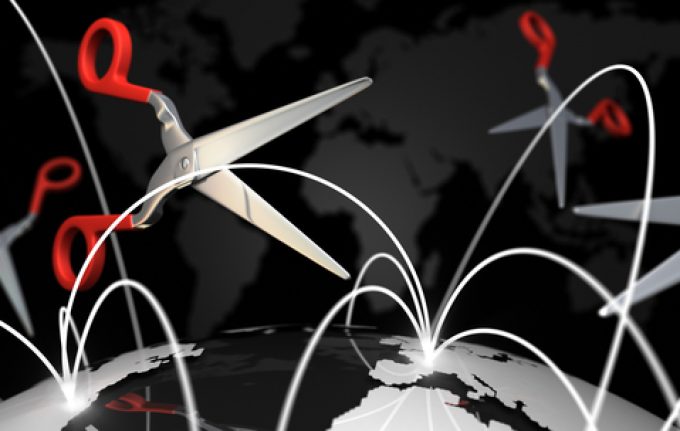 Ocean carriers are preparing to implement the severest cuts to liner services since the beginning of the pandemic, as demand levels plummet across global tradelanes.

Indeed, The Loadstar understands that, following the recent culling of services on the transpacific, the three vessel-sharing alliances are considering the temporary suspension or merging of some Asia-North Europe loops to mitigate the impact of a dramatic slump in bookings and to slow the erosion of freight rates.

Meanwhile, according to Drewry, the liner industry is entering a ‘pivotal period of managed decline’, which will ultimately decide the fate of ocean carriers.

“What they do next will go a long way in determining how much of the gains from the super-cycle they get to keep,” it says in its latest Container Insight release.

“Failure here will mean the industry will be doomed to return to the low-margin pre-pandemic trend,” it warns.

Drewry has lowered its growth outlook for this year to 1.5%, and to 1.9% for 2023, on the back of downgraded GDP predictions, and this compares with an expected 11.3% net increase in capacity next year as some 2.6m teu of newbuild tonnage hits the water.

But the maritime consultant is optimistic that the shipping lines will be able to “pull the right levers” in the current cycle to adjust supply to meet demand and swerve a hard landing. Those levers include pushing back the deliveries of some newbuilds and consigning vessels to lay-up.

“It is the speed with which the market has turned that has led us to believe carriers will fight back with more proactive capacity adjustments than previously envisioned,” said Drewry, adding it believed carriers “would not sit idly by as spot rates tumble”.

The consultant said: “To maintain profitable business, they will look to offload as many older, more-polluting ships from the market as quickly as they can,” and added that it expected a near-record level of demolitions next year, in contrast to the near-zero level of scrapping in the container sector this year.

Barring cancellations, there is a record orderbook pipeline of about 7m teu, which according to Alphaliner could tip the liner industry “towards structural overcapacity”. The consultant said the ordering bonanza of the past two years had “pushed the global orderbook-to-fleet ratio to just under 30% by late September, up from a low of around 9% some two years prior”.

It noted that 56% of the orderbook was destined for the world’s top-five carriers, either through ownership or long-term charter commitments.

According Alphaliner data, the orderbook is dominated by MSC, which will receive a massive 1.5 million teu of new tonnage over the next few years, representing a third of its current fleet. Rival CMA CGM has an orderbook of 700,000 teu, Cosco is to receive 590,000 teu and Evergreen 520,000 teu.

“The jury is still out on whether the market can absorb this,” said Alphaliner.