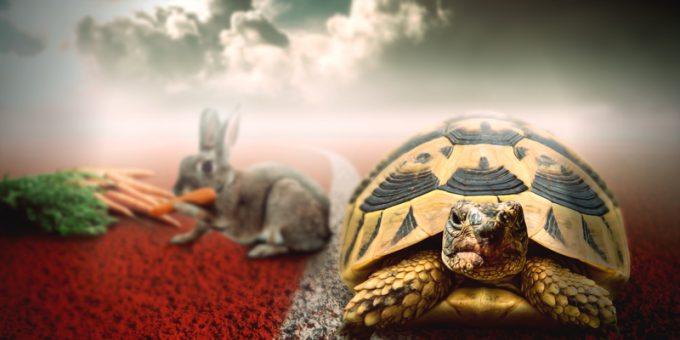 News that the Digital Container Shipping Association (DCSA) is frustrated with the lack of progress in digitising bills of lading will come as no surprise to those of us who have long-studied inaction in air cargo.

The DCSA is determined to avoid the same mistakes, and chief Thomas Bagge is laying down the gauntlet: can you, the ocean freight industry, make this inevitable change faster than air cargo has?

On the face of it – you can. You’d only need marginal enthusiasm for the project to move faster than the glacial pace of change, ironically, shown by otherwise speedy airlines.

Perhaps a little history lesson is in order – a chance to see the pitfalls coming up, and step neatly around them. Or, perhaps, be incentivised by the threat of the sheer boredom of watching this process for the next decade.

Because, if you don’t pull your socks up, this is how long the debate, the mud-slinging, the excuses and the empty words of the unbelievers will last. It’s like a slow-motion version of the Brexit civil war.

But if that doesn’t make you want to act faster, then there are always the cost-savings (although we know you’re all rather hooked on the business of making money right now, in an apparent u-turn from traditional strategies).

So, where did it all begin in air cargo? Well, before (Loadstar) records began, in fact. We formally launched in March 2012, and our first mention of the eAWB was in November of that year – when Customs and Border Protection approved the use of the master e-AWB for shipments to and from the US.

That sounds pretty momentous, doesn’t it? But it turns out to have been just the start of a very long discussion. In fact, The Loadstar’s entries on e-AWBs over the next few years read like a teenage diary – complete with blame, petty fights, recriminations and tears. (Well, maybe not actual tears, but certainly metaphorical ones)

IATA admitted, at the end of 2012, that introducing e-freight “has been harder to do than originally thought”. And here comes the first of many industry excuses.

“Some airlines are saying that now isn’t the time to be introducing it when they are losing money on freight. But we need to at least prepare the ground to make it work when things are better,” said IATA chief Tony Tyler.

(You have to remember, at this point, the key difference between shipping and aviation industries. Shipping, although it’s sometimes been hard to believe, has autonomy over its actions. Large swathes of the aviation busines, however, are driven by passenger-focused executives – consider that cargo makes a higher percentage of revenue for a typical carrier than first class – but which one gets the investment? It’s also worth remembering how e-ticketing went in the passenger business – IATA adopted global standards in 1997, but by 2004, only 19% of tickets were electronic. So IATA gave itself four years, and on June 1 2008 made e-tickets mandatory.)

But back to the cargo side of the business. 2013: IATA’s target has had to be revised, downwards owing to lack of progress. But it has not learned any lessons from that, apparently, opting for a new aim of 20% e-AWB penetration by 2013, 50% in 2014 and 100% in 2015. And yes, this is the point at which the hollow laughter starts…exacerbated by the following comment from Steve Gunning, head of IAG Cargo, in March 2013: “We’ve gone past the tipping point. We’re not debating the benefits. It’s now about how we implement it as quickly and efficiently as possible.”

Change was in the air. In possibly the last successful collaboration between IATA and Fiata, the rivals announced that they had approved the multilateral e-AWB, removing the need for individual agreements between airlines and forwarders.

But just a month later, more excuses begin: “it’s the transition period that’s difficult,” explains an IT company. “You have the costs for both paper and e-freight and you can’t eliminate one because you need both. You have to have management behind the concept to get through this stage.”

Meanwhile, freight forwarders mumble darkly about other “white elephants” that failed to take off, so why invest in this one?

Some companies, of course, were on it. At the BFS handling facility in Hong Kong, in 2014, just 7% of exports used e-AWBs, and 2% of imports. But BFS archived all its paperwork electronically in 2009, saving some 25 million sheets of paper, and $240,000 in direct costs. It then sold the paper for recycling, using the cash to buy staff dinner from time to time.

“If you think about the paper, toner, cartridges – you can cut direct costs out, and that’s before you’ve assessed the extra efficiencies. Continuing with paper is unsustainable,” said MD David Ambridge.

March 2014 saw a record number of eAWBs – but market penetration was only 13.4%. IATA announces a “name and praise” initiative.

September 2014: the outbreak of good relations between IATA and Fiata comes to an end; forwarders push back against various carriers’ plans for a paper air waybill surcharge. They argue for the carrot, not the stick, and claim to be sick of being called ‘luddites’.

Meanwhile, Lufthansa Cargo said it was entering data nine times between receipt of cargo and loading the aircraft. And not one digitised air waybill, out of 1,000, matched the paper documents.

New data reveals that e-freight could cut a day from transit times, saving shippers $4.2bn, while carriers and forwarders would also benefit significantly. However, time is running out.

“There is $12bn in unlocked value that can be achieved here,” said Michael Steen, CCO of Atlas Air. “In the meantime, the integrators are eating our lunch.”

October 2014: more bickering. Mumbai Airport looks to charge a fee for e-AWBs, causing some consternation. Forwarders claim, slightly unbelievably, “we are still in doubt as to the need and the benefit.” Meanwhile, the ever-diplomatic head of IATA Cargo, Glyn Hughes, says all this rowing between industry partners is “healthy”.

June 2015: the global penetration of e-AWBs has fallen; IATA looks set to miss its new targets – for which there are no penalties other than shame and disappointment.

September 2015: IATA confirms it is developing simple ‘form-fill’ e-AWBs for low-volume forwarders. This of course causes a row with IT suppliers who feel IATA is stepping on their toes.

Rather shockingly, in April 2016, we hear that the US air cargo industry is not convinced of the benefits of e-freight. A “staggering” 28% of 500 delegates present at the US CNS event said they could see no compelling reason to invest in e-freight waybills, while even more, one-third, thought there was no advantage other than cost savings. And everyone thought the best benefits would go to another supply chain partner, rather than their business.

Let’s fast-forward a bit, to April 2018: Lufthansa Cargo introduces a paper air waybill charge and, quietly, several other airlines follow suit. It must have worked, because Loadstar records on e-AWBs begin to thin out at this point.

So, where are we today? The latest figures are from January, and show 71.3% penetration – down 3.2 percentage points from December. IATA has stopped talking targets, but continues to ‘name and praise’.

So, dear shipping industry, please take onboard some lessons. There will be bickering, and there will always be some doubters. Leave them behind. We all know it’s inevitable, so why not start enjoying the data accuracy, accessing savings and unlocking potential?

Give poor Mr Bagge a helping hand to boost your own business.  And all you have to do to beat air cargo is be nippier than a glacier. Even in slow-steaming mode, you can surely do that…