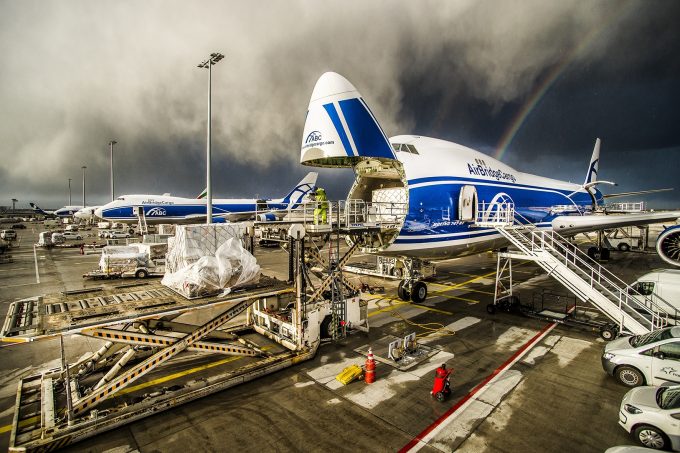 Air cargo shippers on Asia to Europe lanes should expect a hike in prices after a substantial amount of capacity has come out of the market.

The EU and UK ban on Russian aircraft in their airspace has seen Volga-Dnepr Group’s AirBridgeCargo remove all its aircraft from Europe in the past three days.

At least four aircraft departed the EU yesterday as the ban came in, according to FlightRadar24. ABC has 15 747Fs, and one 777F in its fleet, a large amount of capacity, particularly given the current marketplace.

The aircraft are either currently in Russia or operating to destinations in Asia, primarily China, but Asia-Europe is its key operating region. It remains to be seen what volumes it can carry in its new restricted world.

Volga-Dnepr Airlines’ aircraft have also left the EU, with one AN-124 destined to arrive in Marseille yesterday, diverted to Tunis. Canada has also banned Russian airlines from its airspace, but one AN-124 appears to be in Toronto, and it is unclear whether it will be able to leave.

The US is considering a ban on Russian airlines but has not yet implemented it. ABC had two aircraft in the US over the weekend – both have now departed.

EU airlines associated with Volga-Dnepr – Cargologicair in the UK and Cargologic Germany – continue to operate normally, and all aircraft are currently in the EU or UK.

But it is not just Russian airlines impacted. Finnair Cargo has cut all its operations to east Asia, reducing capacity again. A spokesperson told The Loadstar it would not operate to Osaka, Tokyo, Seoul, Shanghai or Guangzhou, with a review of the situation to take place on 6 March.

The airline said: “The potential Russian airspace closure would notably impact air traffic between Europe and Asia, which plays an important role in Finnair’s network. The negative financial impacts on Finnair will be significant, especially if the situation prolongs.”

CEO Topi Manner, added: “The crisis in Ukraine touches all Europeans and we understand the EU’s decision to close its airspace. We are implementing our contingency plan as the situation has a considerable impact on Finnair. Bypassing Russian airspace lengthens flight times to Asia considerably and, thus, the operation of most our passenger and cargo flights to Asia is not economically sustainable or competitive.”

The carrier, which said it was withdrawing its earnings guidance as a result, added that it was “considering different solutions in case the situation prolongs”.

SAS said it was continuing to operate routes to Tokyo and China, but was also “closely monitoring the situation”.

The impact on the market is likely to be substantial. One industry executive said: “If this continues, the implications for the supply chain will be difficult to overestimate. Supply chains are so intertwined, there any many possible side effects.”

He also pointed to potential macro effects, such as additional inflation in Europe, denting consumer demand. But he also speculated as to how ABC could try to operate.

“There could be a creative solution, perhaps via Istanbul, or working with partners,” he suggested.  “Although customers may add to the pressures on the airline. In an already fragile environment, this will have a profound impact on supply chains.”

Rail on Asia-Europe is also likely to be affected, reducing capacity even further. Flexport was among the first forwarders to stop taking bookings on the overland service, but others are likely to follow as economic sanctions, and the Swift payment ban, begin to hit.

UK forwarder association BIFA has advised forwarders to make sure they are aware of the routing of cargo and to check with insurers on their liability, “as cover may be withdrawn and/or premiums increased for goods being shipped to/from Russia for example”.

Vogla-Dnepr Group was unavailable for comment, but the impact will be felt strongly by its customers who are expected to be rushing to find new capacity, as well as by its European staff.

The group was thought to be shocked by the news of the invasion, and one senior source at Volga-Dnepr expressed deep sorrow at the news that rival Antonov’s AN225, Myria (translated as ‘dream’), has been destroyed. Antonov, via social media, said yesterday: “Until the AN-225 has been inspected by experts, we cannot report on the technical condition of the aircraft. Stay tuned for further official announcements.”

However, Ukraine’s foreign minister, Dmytro Kuleba, said on Twitter: “Russia may have destroyed our Mriya, but they will never be able to destroy our dream of a strong, free and democratic European state. We shall prevail.”

Ukrainian defence company Ukroboronprom, which manages Antonov, also said the aircraft had been destroyed, but claimed a $3bn, five-year rebuild would be at Russia’s expense.

The aircraft had been undergoing maintenance and had been unable to leave Ukraine in time.