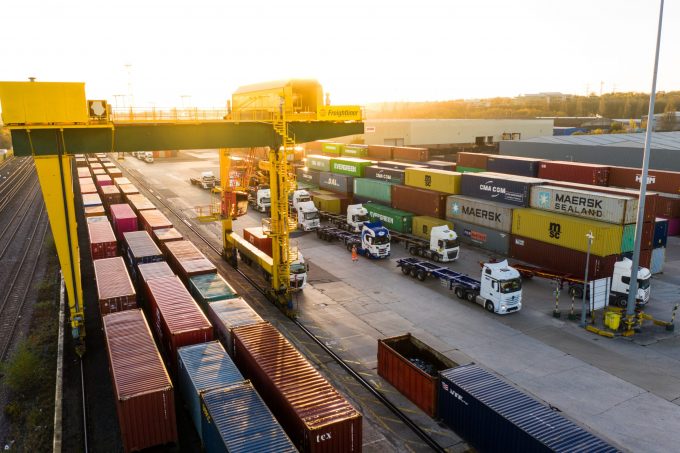 Reports this morning indicate that an intermodal tug-of-war is under way in the UK.

There are conflicting accounts of pressure easing on road freight coinciding with increased rail freight uptake and new capacity on the way.

“Europe’s largest truckstop”, with space for 650 HGVs, opened today in Ashford, Kent, “a welcome addition for hauliers working in Kent” according to Logistics UK, which added that there was “room for cautious optimism” in road freight today.

But other key indicators for the period were more positive: average gross hourly pay was up 7.8%; and theory tests exploded, increasing overall HGV driver testing by 25.6%.

Elizabeth de Jong, Logistics UK policy director, said the segment had shown “incredible” flexibility and resilience in dealing with Brexit and other supply chain disruptions, considering the reduced size of its workforce.

However, she added: “…in order to retain staff and attract new drivers, smaller fleet operators are still not back to full fleet capacity after the Covid-19 pandemic shutdown, and their inability to compete for drivers by offering higher wages appears to be hindering their efforts to recruit new staff.”

Meanwhile in rail, GB Railfreight reports it has trained 70 new drivers in the past 12 months, with volumes buoyed by the entry of big retailers.

Tesco is  shipping 65,000 containers by rail and wants to increase this to 90,000 in the next few months and Dunelm recently announced a new warehouse at Daventry International Rail Freight Terminal (DIRFT). The facility will employ another 4,000 people in January with the opening of its new terminal.

Over the weekend, Paul Weston, regional head of Daventry owner Prologis UK was quoted by the BBC as saying rail was “coming into its own,” adding that “every train that comes in takes 60 HGVs off the road”.

Phil Smart, assistant policy manager at Rail Freight Group, said: “The truck driver shortage… has exacerbated a trend that was already there. In future, road and rail are going to have to work as partners, rather than as competitors.

“Not only have there actually been more trains put on, but [we have] identified the ability to do it. For example, Network Rail has re-evaluated the risk around a particular level crossing and decided more trains can run over it, which means three times as much rail freight out of Felixstowe.”

Mr Smart reports that recently, ever-shorter routes, previously the uncontested remit of trucks, were being used by rail as well.

“The pendulum is swinging back very firmly. From Liverpool to the West Midlands, from the Humber ports to Doncaster Rye port, a very short distance — that’s going to rail.”

Nevertheless, UK government policy is having a positive effect on driver shortages according to David Wells, Logistics UK CEO. In the skills and employment report, he wrote: “Although Logistics UK has been highlighting shortages and actions required for many years now, this year, government policy-making to help address some of the contributing causes for the driver shortage has been rapid, with the focus on changes which will yield benefit in 2022 and years ahead.”

The report uncovers other interesting trends, including that the UK had managed to find 19,000 more van drivers in Q2 21 than in Q2 19, an increase of 6.7%, despite the departure of 45.2%, or 21,000, of its van-driving EU-nationals. However, the same could not be said for forklift drivers, of which a grave shortage appears to have opened up after 49.3% of EU-national drivers departed between Q2 19 and Q2 21, precipitating an overall decline of 31.5%.