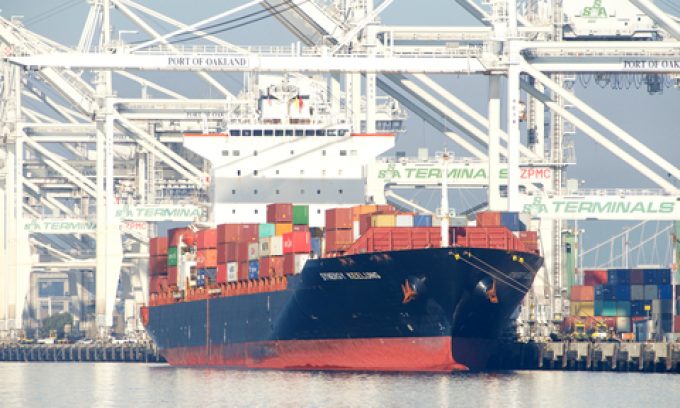 Cargo was finally flowing again through the US port of Oakland yesterday after a blockade by truckers had paralysed freight traffic over the past week.

And agriculture shippers hope there will be no repeat of the blockage.

“The port of Oakland has resumed full operations,” announced a relieved port executive director Danny Wan yesterday, after truckers had decided not to continue their action at the port’s gates.

In protest against California’s AB5 legislation on employment status, truck owner-operators, who constitute the bulk of drayage drivers in the state, had started action at the port of Los Angeles on 13 July, but shifted to Oakland the following week as their impact at the larger port had been negligible.

At Oakland, their protest had a marked impact: they blocked access to the port’s terminals, stopping the flow of cargo in and out of the port; and, in addition, longshoremen did not cross their picket lines, citing safety concerns, which meant ships at the port were not unloaded and remained idle at the docks, while a queue of waiting vessels grew. By Friday, the vessel backlog had risen to 12, although one ship cancelled its call at Oakland after three days of waiting and went to Los Angeles instead.

According to Project 44, dwell times of import containers at the port had risen to more than two weeks by Friday. Prior to the trucker protests, dwell times had been 10 days, but that was due to problems with intermodal capacity.

The blockade also took its toll on exports through Oakland, with fears rising among shippers that they might not be able to get their cargo loaded on ships before the end of this week, at the earliest. For many this was a dire prospect, as a large portion of the port’s exports are perishables.

According to some industry experts, the ports of Los Angeles and Long Beach could not handle the full amount of perishables that usually move through Oakland. Moreover, exporters would face higher costs slotting their cargo through the southern port complex.

The US Meat Export Federation was among the first industry groups to express concern about the trucker blockade of Oakland – the main export gateway for many of its members to ship beef and pork to Asia. It pointed out that delays of more than two days would force shippers to freeze their meat, which lowers its value and incurs costs for the refrigeration.

Dairy exporters were also on edge. The US Dairy Export Council and National Milk Producers Federation said the blockade added to a “litany of woes” that have beset its exports over the past two years as its members struggled to find capacity.

And California’s almond exporters had enjoyed a record-breaking June and were expecting a similarly strong July that would see between 200m and 250m pounds of the nuts sent overseas. The trucker protests put paid to that, as a week’s closure of the port of Oakland would reduce export volumes by 50m to 65m lbs.

“The supply chain is already in crisis. This is a huge disruption,” executive director Peter Friedman told the Wall Street Journal.

Oakland was actually about to step up its game in agriculture exports. In early June, port executives and US agriculture secretary Tom Vilsack announced new measures to bolster this traffic. A 25-acre site is planned for exports of agriculture commodities to bypass congested infrastructure and the government is offering subsidies to agriculture shippers that use Oakland, Seattle or Tacoma for their exports. It will pay them $200 per container of farmed goods and $400 per reefer container going through these ports.

Last Thursday, the port of Oakland took steps to defuse the situation on its doorstep and get cargo moving again, offering to act as liaison between the truckers and the state government, simultaneously setting up ‘free speech zones’ for the protests, where they would not disrupt the flow of cargo.

At the same time, it warned that continued blockades would be dealt with by law enforcement.

On Friday, there were signals of defiance from truckers, saying they would remain in place until AB5 was repealed, but the blockade was lifted for the weekend and did not resume on Monday. There was no official statement from the truckers, but individual operators said they did not want to hurt the port and its users, and that they needed to resume business to pay their bills.

While this returns the port to normal operations, there is a possibility it could see another spell of protests over AB5. One trucker warned that protesters would come back to the port if there was no progress on the AB5 issue.