News / California refuses to back down on AB5 law, as truckers blockade port 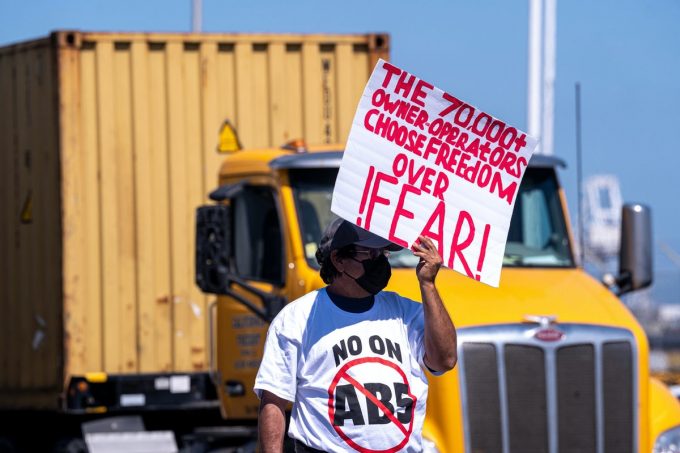 Oakland International Container Terminal and the Stevedoring Services of America (SSA), which operates Matson’s Oakland facility, have been closed to traffic, with ships anchoring outside waiting to berth.

Also slowing the working of vessels has been the reluctance of dockers from the International Longshore and Warehouse Union (ILWU) to cross picket lines, causing a shortage of labour on the terminals.

Farless Dailey III, ILWU Local 10 President said: “Every day, ILWU workers are getting up at 5am to drive to the dispatch hall and fill jobs at the port. But when they get to the terminals, the trucker protests are creating conditions which make it unsafe for workers to pass through the gates and do our jobs.

“So we have dispatched 450 workers in the past three days who haven’t been able to get in to move cargo for the day, and they don’t get paid when they don’t get in. ILWU workers want to work and move cargo, just like we have every day even during the worst days of the pandemic. We are in favour of AB5, not against it. But we’re not going to put our members in harm’s way to pass through the line of truckers.”

VesselsValue AIS shows four vessels in San Francisco Bay and a further four at the berths, with at least seven vessels heading for the area and already close.

Assembly Bill 5 (AB5) was originally passed by California’s state legislature in September 2019, following legislation presented by former assembly member Lorena Gonzalez. But a lawsuit brought by the California Trucking Association attempting to have the bill quashed effectively put the regulation on hold.

However, a US Supreme Court ruling on 30 June has paved the way for the legislation to be enforced after a seven-day lead-in period, leading truckers all over the state to complain. But drivers in Oakland have blocked the port, effectively preventing all containerised cargo movements in and out for the past four days.

AB5 was passed to protect workers by defining an employee using what has become known as the ABC test. According to AB5, a worker is independent if:

Many of California’s truckers are owner-operators and want to maintain that status, but the Teamsters Union and others forsee the ability of companies to contract workers as a method of cutting costs, such as holiday pay and other benefits enjoyed by employees.

A US longshore union representative has laid the blame for supply chain woes across the ...