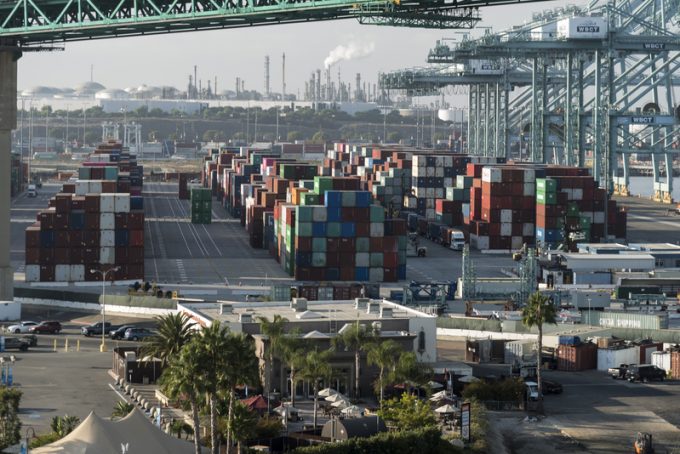 Transpacific carriers have reacted to a robust demand outlook and record container spot rates by deploying extra loaders on the tradelane.

With October advance vessel load data for the port of Los Angeles running 30% to 34% higher than last year, carriers are also looking at more permanent network upgrades on the route.

According to an assessment by Alphaliner, the average weekly headhaul capacity between Asia and North America reached a new high of 530,000 teu in the rush before the Chinese Golden Week holiday, which begins tomorrow.

“The offering on the transpacific has been further increased as both Cosco and Wan Hai Lines organised one additional seasonal service each,” noted the consultant.

According to Alphaliner, Cosco is now operating five 8,500-9,500 teu vessels on its extra loop, linking the ports of Shanghai, Ningbo, Xiamen and Yantian with Los Angeles, while Wan Hai has deployed extra 2,750-4,950 teu ships between Haiphong, Yantian, Kaohsiung, Shanghai and Long Beach.

And the port is on track to announce a new record for imports of some 600,000 teu in September.

Moreover, according to its Signal data forecaster, which provides a three-week look at cargo coming into LA, imports for the first week in October are up 34% on the same week of 2019 and ahead 30% for the second week.

Port of Los Angeles executive director Gene Seroka said that, to reflect the sharp recovery in imports, he was upgrading his full-year estimate for a total throughput of 9% below 2019, from his earlier, more pessimistic, deficit of 15%.

“Among the catalysts that could be driving the strength in recent inbound loads, primarily from China, is large retailers moving loads to make up for earlier cancelled sailings,” suggested John McCown, founder of New York-based consultancy Blue Alpha Capital.

While incremental shipments of PPE and other items relating to the virus had a big impact on volumes, Mr McCown said the “major shift to e-commerce sales” had resulted in the “expansion of new supply chains and distribution centres that needed to be stocked up”.

Jonathan Gold, VP of supply chain & customs policy at the US National Retail Federation, said retailers were still going to be cautious and not over-order and put themselves in a difficult position should there be another shutdown.

“Usually retailers are planning three, six or nine months ahead, but obviously this is a very different scenario and, as the consumer continues to show confidence and sales continue to increase, retailers are trying to meet demand to make sure they are ahead of the curve,” he said.