News / Profile: a logistics Reformation on the road in just eight weeks 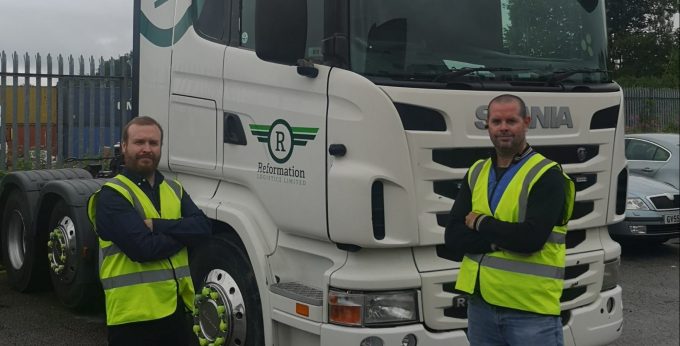 Global pandemics and ever-worsening driver shortages are not ideal conditions to launch a new haulage firm – yet for Reformation Logistics, the summer of 2020 proved to be a period of opportunity.

“In the eight weeks from July, we had Reformation up and running,” Alex Lomas, who with brother Tim Matthews founded the firm, told The Loadstar.

Both brothers have significant experience in logistics, with Lomas having spent three of the preceding five years developing Panalpina’s intermodal product and LCL business.

“I was travelling Europe and instituting a centralised intermodal market system for the company, which for the company was incredibly progressive and friendly, but I found it a difficult period,” added Mr Lomas.

“In the end, I had to get out, and ended up as a business development manager for a haulage company in Felixstowe, a former supplier, thanks to the contacts I’d accrued.”

As Mr Lomas was building up operational knowledge, brother Tim was honing his fleet and depot management skills at the likes of Elite, Roadways and Pentalver  and, when both found themselves seeking a new challenge, all they needed was the financial backing to go it alone.

“I’m a risk taker, but this did not seem like the biggest risk, it was an opportunity to go into business with our dad’s friend, who was like an uncle to us,” Mr Matthews told The Loadstar.

“He had a couple of older units which he was unable to work, and we had the contacts, the experience and the understanding of how the haulage sector works.

“But then the pandemic hit – it was a tough time and the focus turned to survival. And as the pandemic appeared to be easing last summer, the fallout came. When we disagreed on how to proceed, he said he had all the power and would shut it down.”

For the brothers, it was a wake-up call, and while one relationship may have disintegrated, they recognised there were still several “hanging on the line” – not only had the pair invested what little money they had, but they had also staked their reputations on the business.

“We needed trucks – we reckoned 15 to get up and running. We needed insurance and we needed a credit agency to help us with cash flow concerns, so we started scouting around.”

Mr Lomas said it was not an easy sell.

“Normally start-ups wouldn’t be asking for 15 trucks from day one, and the response we got was ‘who are you?’ But at this point our CVs and background played a blinder,” he added. “Over the space of about three days at the end of August, everything came together. We had an old friend offer us nine trucks, a further four were sourced from an asset company and then we got the insurance sorted.

“It wasn’t quite 15, but with 13 trucks we felt we could keep things running for about three months – but we had to get to 15 within three months to be viable.”

As for the business they had formed with the family friend, “nothing was in writing, it was all done on trust”, and this is maybe where much of the leverage was lost and won – not being tied in meant they were not trapped,  said the brothers.

“It wasn’t easy, we left on a Friday, having been told the company was closing, knowing we’d go live on the Monday,” Mr Lomas added.

“It was a complete gamble, calculated because of our backgrounds, we knew we had the contacts and that they wanted our service. Our main focus was on ensuring that we protected those clients because once the old business shut, they’d be left with cargo undelivered.

“But now we have a portfolio of clients bigger than anything we could have imagined,” including one of the world’s largest container carriers and hopes of another coming soon.

Reformation’s fleet not only reached 15 within its three-month timeframe, but the firm is now operating 25 a day, 10 subcontracted and 15 owned. Not bad, considering four of the first 13 needed replacing within the first six months of business.

“We like assets, we continually reinvest in equipment as this offers security that using an asset company, which could lose its trucks at any moment, doesn’t,” said Mr Matthews.

His brother added: “We’re in a really transitional moment; we had to embark on a fleet renewal programme quicker than originally planned, taking on newer trucks from MTC/MAN, Thomas Hardie Volvo and a second-hand truck from Maritime Transport. But we are attracting a lot of attention from potentially massive customers and our present portfolio is as good as any of the big boys.”

Looking ahead, the brothers are excited, not only as their business expands with the prospect of an increase to their operator’s licence on the horizon, but as business in the region they serve – Liverpool – looks to be on the up, with Peel Ports’ plans to further develop inland locations.

“The not-too-distant future looks incredibly bright for us and the region.”