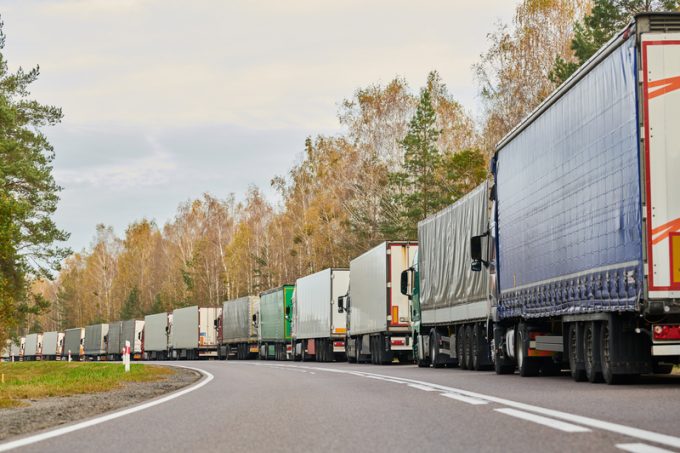 Weekend protests in Poland prevented hundreds of trucks from crossing the Poland-Belarus border at the village of Kukuryki, creating queues of up to 40km,  according to some local sources.

According to the Sixfold border crossing traffic monitor, the queue of trucks currently waiting to leave Poland for Belarus stretches 14km.

Some 200 campaigners, many Ukrainians, gathered over the weekend in a bid to prevent trucks crossing the border.

The protest was a repeat of direct action last week. AP drone footage from last Tuesday showed at least 80 trucks still queueing days after protesters were moved on by Polish police.

One protester told a Polish news outlet that at first the police “didn’t interfere”, but rather moved to ensure the safety of the protestors as confrontations and fights broke out between drivers – some reportedly Putin supporters – and protesters.

Some of the drivers told Polish newspaper Gazeta Wyborcza their trucks were ultimately bound for Russia, the sit-in protests designed to make this more challenging and unpredictable.

In apparent support of the protests, Poland’s prime minister, Mateus Morawiecki, on Saturday demanded a total block on trade between the EU and Russia.

“Poland is proposing to add a trade blockade to this package of sanctions as soon as possible, (including) both of its seaports… but also a ban on land trade. Fully cutting off Russia’s trade would further force Russia to consider whether it would be better to stop this cruel war,” he said.

On Friday it was announced that Switzerland, although not an EU state, would join it in imposing sanctions on Russia.

Belarus, a trade partner and military ally of Russia, is also under sanction by the EU and although this does not include food and medicines, protesters suspect the trucks of being loaded with sanction-busting ‘luxury-goods’ – such as handbags, watches, perfume and precious stones – as well as ‘dual-use’ equipment which could potentially be used to supply the Russian military.

The Polish government said that although the trucks were under suspicion, it was unable to conduct sufficient border checks to stop them.

A statement to the European Parliament by Polish MEP Madgalena Adamowicz last week said that “information [had] come to light from authorities operating on the EU’s internal borders” which suggested that international trucking was being used to evade sanctions.

“There is therefore an urgent need to support member states in their mission to carry out more effective control of the flow of goods,” she added.

And Polish government spokesperson Piotr Müller told The New York Times: “For this to be effective, and not just a gesture, these actions need to be coordinated. Since all the EU states do not agree on this point, we are looking for legal loopholes to limit such activity locally.”

Belarus Congestion indigestion Poland Russia-Ukraine War Strike inaction War! What is it good for? AN-225 Antonov