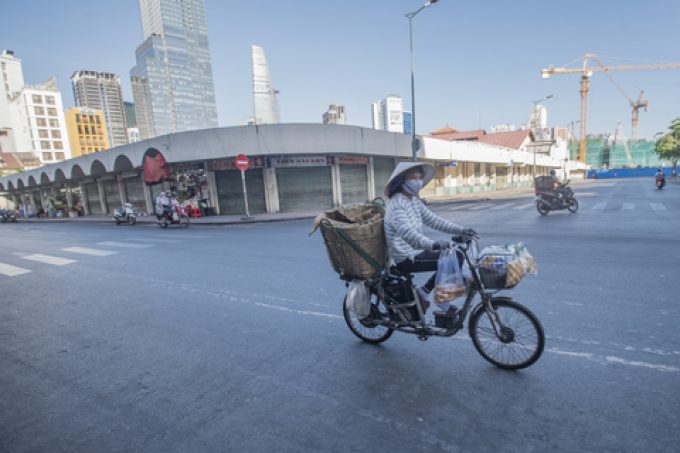 Freight forwarders in Vietnam have seen cargo volumes down by up to 70% on pre-coronavirus levels, as their key markets remain under lockdown.

And according to Ho Chi Minh City-based supply chain consultant CEL, the world has entered a consumer demand crisis which could permanently alter its supply chains.

“Most of which are made in Asia, and a large portion in Vietnam.”

Mr Brun said the country’s exporters were seeing orders from Europe and the US being cancelled on a daily basis, and forwarders seeing volumes collapse. Vietnam’s exports are projected to have fallen by 21% in the first quarter.

Apart from some cross-border trucking delays due to border closures with China and, more recently, Cambodia, the main impact to cargo operations in Vietnam has been the dramatic drop in airfreight capacity following the grounding of passenger fleets.

Mirroring the global market, most airfreight shipments currently moving through Vietnam are medical supplies, and international forwarders are reporting a big increase in charter flights out.

While demand is now the biggest challenge for exports, it was mostly the supply-side impacting business when the crisis began.

For example, when the coronavirus pandemic started in Wuhan in January, the crisis was seen as a China-specific problem from a supply chain perspective, and prompted a frantic search for alternative production and transport capacity in Vietnam, Mr Brun explained.

Vietnam’s own reliance on China for raw materials and components quickly materialised, however, resulting in the start of delays and production challenges.

“In a survey conducted by CEL at the end of March, 83% of companies in the physical value chain in Vietnam, including retailers, transporters, traders and manufacturers, had suffered supply issues over the past two months,” he said.

“And 47% of them had issues specifically with Chinese suppliers, a large majority of which was over missing raw materials.”

“A number of SMEs have already declared bankruptcy and for others the impact on human resources, the main adjustment variable, are being felt strongly and unemployment is threatening multiple industries,” he added.

Like its key export markets in the west, Vietnam is also two weeks into a lockdown period, with no official end in sight.

One consequence, according to Mr Brun, is the surge in offline-to-online shopping, with an increase in e-commerce orders estimated at 300% by major players in South-east Asia, such as Lazada and Grab.

“One of the main challenges this shift creates in domestic distribution is the ability to transfer goods over long distances,” he explained. “For example, between North and South Vietnam, as airfreight and rail transport are constrained. Long-haul trucks become scarce and lack of transport capacity generate delays and extra disruptions.”

Meanwhile, CEL’s survey also noted there could be a long-term shift from global sourcing to more localised supply chains, which will affect export economies like Vietnam.

“Mature markets will develop autonomy with localised and re-nationalised supply chains and thus reduce their dependency to export markets,” said Mr Brun. “Free trade agreements may be challenged. Consumers will put higher preference to local products versus imported ones, also for environmental reasons.

“As an illustration of such a trend, in early April, 84% of French people expressed the wish to have more local products and reduce imports from Asia.”