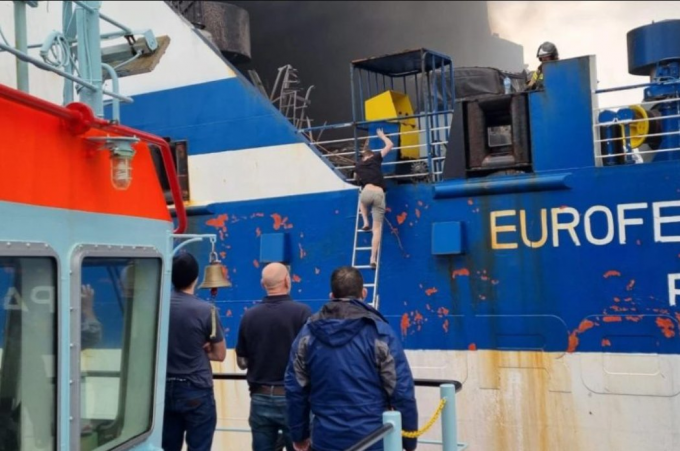 A Greek truck driver died and 10 Bulgarian, Turkish and Greek people are unaccounted for after ro-ro Euroferry Olympia, owned and operated by Grimaldi, Caught fire in the early hours of Friday morning.

The still-smouldering vessel today is at anchor off the port of Kassiopi, in Corfu.

The vessel was carrying more than 290 passengers and crew from Igoumenitsa, in Greece, towards Brindisi, in Italy, laden with 153 trucks and 32 cars when the fire began at 4.12 am local time on 18 February.

The Hellenic Coast Guard has rescued 280 passengers, with the body of the driver recovered on Sunday.

The latest two passengers to be rescued were an Afghan national and a Belarusian truck driver, who reportedly climbed into a tugboat from the ferry asking rescuers: “Tell me I’m alive.”

Ten people were still unaccounted for this morning. A coast guard spokesperson told The Loadstar searches onboard the vessel were continuing and three coast guard ships, three tugboats, a firefighting vessel and two helicopters had been dispatched, adding: “The operation is ongoing, there is still smoke from the ship.”

One survivor told local news station ERT: “We woke up around three in the morning and all wore life jackets at the concentration station. There was fire and smoke everywhere. The crew gathered us, dividing us into groups, in two boats. The order to leave the ship was given. We were lucky the weather was good.”

Grimaldi Group spokesman Paul Kyprianou dispelled social media conjecture that the fire originated from an electric car, indicating that it had begun on a truck.

“We don’t have any information that the vessel was carrying electric batteries,” he said. “From the information we have, it started from a normal truck.”

Mr Kyprianou told The Loadstar that despite rumours, the vessel had adequate accommodation for everyone on board and drivers would not have needed to sleep in their cabs.

“There were 239 passengers and we had 308 beds in the cabins, as well as over 400 reclining seats onboard. So, there was enough space for everybody.”

GEFCO on the block – report

REUTERS reports: Gefco has been put up for sale by owners Russian Railways (RZhD) and carmaker ...