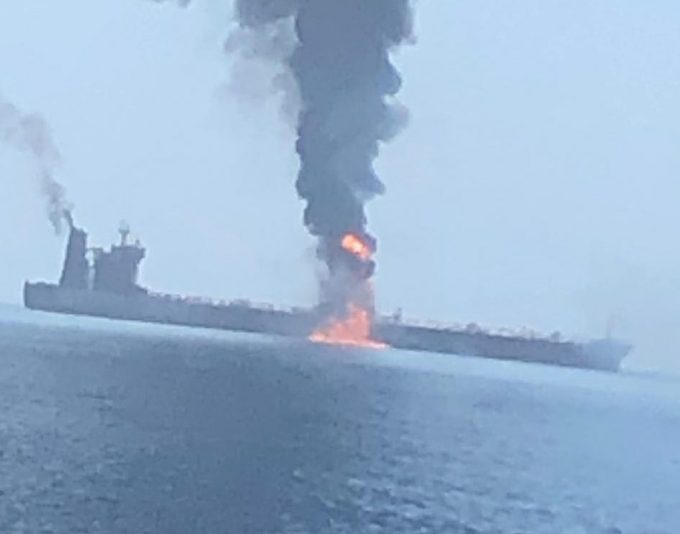 After two tankers were reportedly hit by torpedo attacks in the Gulf of Oman early this morning, the UK Maritime Trade Operations (UKMTO) Royal Navy agency has issued a warning to shipping, urging “extreme caution” in the area.

The 110,000 dwt Aframax oil tanker Front Altair was en route from the UAE to Taiwan when it was attacked at around 2.30am local time, while the 27,000 dwt product carrier Kokura Courageus, going from Saudi Arabia to Singapore with a cargo of methanol, was attacked in roughly the same area around three hours later.

According to sources, the crew of both tankers abandoned ship and 44 seafarers were picked up by passing merchant vessels, with fortunately no reports of serious injuries.

Both ships are reported to be ablaze and drifting, with their AIS systems still operational, but reports that the Front Altair sank have been denied by the ship’s Norwegian owner, Frontline.

The ships had already transited the 21-mile wide Strait of Hormuz, which Iran has repeatedly threatened to block as tensions rise over US trade sanctions, when they were attacked.

In a statement this morning, the Singapore office of Bernhard Schulte Shipmanagement (BSM), the Kokuka Courageous’ manager, said it had launched a “full-scale emergency response following a security incident” on board the vessel.

It said the 21-strong crew of the vessel had abandoned ship after an incident that saw damage to the ship’s hull on the starboard side.

“The master and the crew were quickly rescued from a lifeboat by a nearby vessel the Coastal Ace,” it added. “One crewman was slightly injured and is receiving first aid.”

BSM added that the vessel remained in the area, was not in danger of sinking and that its cargo of methanol “is intact”.

The incidents come after four tankers suffered “sabotage” attacks off the UAE last month, while anchored outside the port of Fujairah.

It is estimated that over 20% of the world’s oil is exported from the Middle East through the Strait of Hormuz, making any disruption a potential choke point for supply. The US has deployed warships in the region to counter “clear indications” of threats from Iran.

Oil markets around the world were understandably nervous this morning, with Brent Crude spiking 5% from a five-month low in early trading in London.

Brokers told The Loadstar today that shipowners were “increasingly concerned” at the development of events in the Gulf of Oman, adding that the whole region was becoming a “tinderbox”.

Paolo d’Amico, chairman of tanker trade association Intertanko, also expressed concern about the risks to ships and their crews transiting the area.

“If the waters are becoming unsafe, the oil supply to the entire western world could be at risk,” he warned.

Meanwhile, the international shipping association, BIMCO, said the increase in attacks and the escalated threat to seafarers was “an urgent concern for the industry”, and agreed that any disruption would have a “major impact on the oil trade and shipping industry”.

BIMCO secretary general Angus Frew said: “We strongly call for nations to do what they can to de-escalate tension and ensure a safe passage for merchant shipping in the Strait of Hormuz.”

In the cauldron oil and ache