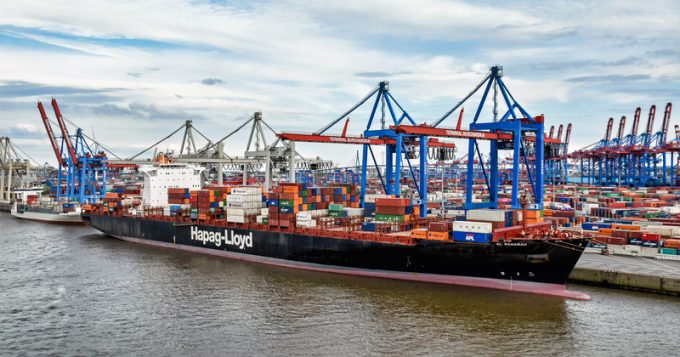 THE Alliance plans to blank a quarter of its Asia-North Europe sailings in the first week of December, coinciding with lead line Hapag-Lloyd’s plans to hike its rates on the route by 70%.

The carrier advised customers yesterday that its FAK rate from Asia to North Europe from 1 December – excluding the UK – would increase by an eye-watering $2,000, to $4,890 per 40ft high-cubed (H/C).

For the UK, Hapag-Lloyd’s FAK rate will be $5,390,  and for west Mediterranean ports the same increase will be applied to take the rate to $4,910.

Moreover, the line is to add an MFR (marine fuel recovery) surcharge of $310 and $296 respectively for North Europe and the Mediterranean.

The Shanghai Containerized Freight Index (SCFI) published on Friday recorded a spot rate of $1,246 per teu for North Europe, although anecdotal reports to The Loadstar in recent weeks have indicated that carriers are actually quoting in excess of $5,000 per 40ft for Rotterdam and up to $500 more for UK discharge.

Alphaliner noted that the record high for spot rates between Asia and North Europe, as recorded by the SCFI, was $4,328 per 40ft, in March 2010, which means should Hapag-Lloyd’s latest FAK rate be accepted, it would set a new record.

Shippers on the route that have agreed contract rates with carriers at much lower levels are also suffering, according to a UK forwarding source: “They are bouncing us into paying their ridiculous FAK rates by rolling our boxes week after week.”

Meanwhile, THEA members Hapag-Lloyd, ONE, Yang Ming and HMM said today that in week 49 they would void their FP2 loop, which has an average weekly capacity of 21,307 teu, according to liner database eeSea.

THEA said it was “to better align resources to match fluctuating demand”.

The FE4 loop, which has been suspended since early May, will continue to be substituted by sweeper vessels, for which the partners deploy ad hoc ships of up to 10,000 teu. Interestingly THEA members appear to be operating independently in providing these sweeper vessels.

THEA also advised that it would blank its MD3 Asia-Mediterranean loop in week 51, maintain weekly sailings in December on the Asia to US west coast route, blank the US east coast EC3 service for weeks 50 and 52 and, on the transatlantic, void the AL4 loop in weeks 50 and 53 and the AL1 sling during week 53.

“During these unprecedented times of the pandemic, the members of THE Alliance have endeavoured to keep the supply chains of its customers moving,” said the alliance.

The European Shippers Council has been highly critical of ocean carriers hiking freight rates at the same time as they withdraw capacity, and is said to be “extremely concerned” by their market behaviour.