A recent incident involving an aircraft departing from Liège Airport has raised the debate over the safety of ageing freighters.

At the end of last week, an engine cowling of a Boeing 747F operated by Air Atlanta Icelandic and bound for Malta, broke off, falling on a property in the vicinity of the Belgian air cargo hub, damaging a garden and garage.

“We feel that beyond the environmental and social aspects, the issue of safety should also be taken into account when aircraft, some very old and obviously problematic, land and take off at Liège every day.

“According to our cross-checking, this 28-year-old aircraft (involved in the incident) had already experienced an incident on 2 December 2021. In addition, this company has also been involved in several other incidents at Liège in 2021 and 2022, and the airport has also experienced two more incidents in August,” it claimed.

Demain is demanding full transparency over the incident and has called for concrete measures from the regional authorities.

No one at Liège Airport’s operating company was immediately available to comment on the incident when contacted by The Loadstar.

Belgian media quoted Pierre Eyben, co-spokesperson for Demain who observed: “It is high time to ask the question of the state and age of the planes that are allowed to come to Liège Airport. As we know, cargo planes are often older. Since the airport will have to act on its noise pollution (following a new environmental operating permit), banning these old, noisy and dangerous aircraft is now an emergency.”

In a statement on the incident, Air Atlanta Icelandic said its B747-400 freighter (registration TF-AMC) took off from Liège Airport on a scheduled flight to Malta.

“The aircraft landed after an uneventful flight, but during arrival inspection in Malta a technician noticed a missing engine cowling, which has since been discovered on the ground in Belgium.

“The incident and its root cause are now being investigated in full co-operation with the relevant authorities in Belgium and Iceland and Boeing has been contacted for technical consultation. The aircraft has since been repaired and resumed regular operations. Fortunately, nobody was injured because of the event and all damages related to it will be compensated in full.” 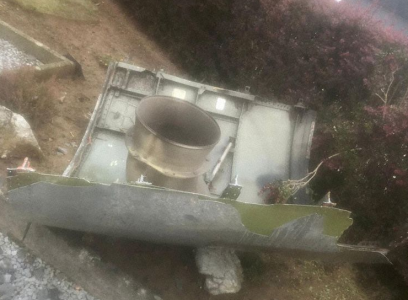 The engine part found in a garden in Waremme Source: Aviation Herald

Asked about the claims from the action group that Air Atlanta Icelandic aircraft have been involved in several incidents at Liège in recent years, a spokesperson for the carrier told The Loadstar: “TF-AMC was not involved in an incident on 2 December 2021 – the aircraft did in fact not come to Liège on that date.

“Air Atlanta has significant cargo operations in and out of the airport. The number of events, such as return to ramp, bird strikes etc. are hence in line with other airlines with similar activities. As a highly reputable EASA and IOSA certified carrier, we operate under the most stringent safety- and quality standards, as well and regularly undergo thorough ramp inspections as well as scheduled audits by various aviation authorities around the world.”

Meanwhile, an industry source said it was unlikely that the age of the aircraft had been a factor in the incident at Liège.

“This kind of thing may happen on a new or old aircraft. The part that fell off looks like an engine cover. It’s not a critical component,” he told The Loadstar.

“An investigation will reveal why it fell off. Perhaps a latch had not been closed properly by the ground/maintenance crew and if so, the age of the aircraft had nothing to do with it.”

Earlier this month, Liège Airport, one of Europe’s leading air cargo hubs, lodged an appeal over its new environmental operating permit for the next 20 years which it claims forces the airport “to drastically and rapidly reduce” its activities and puts its development in jeopardy.

The new permit was issued by the Walloon region at the end of last month. It was the subject of a public enquiry, which revealed regular complaints from local residents about noise pollution from aircraft at the airport.