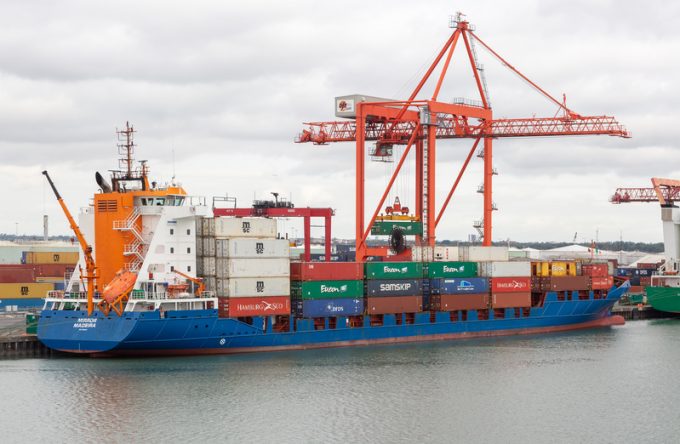 A new service by Containerships has shown the growing importance of the Irish market to carriers.

The service is from Dublin to Rotterdam, and Hapag-Lloyd is adding Waterford to its links out of Dublin, Cork and Belfast

The increasing threat of a no-deal Brexit is prompting Irish shippers to re-examine the availability of all-sea service links to the continent as a replacement for a UK landbridge option that could be subject to tariffs and custom entry delays after 1 January 2021.

Container volumes at Irish ports are down around 14% on 2019, due to the impact of Covid-19, but carryings on feeders are reported to have bounced back strongly in the past month.

Carriers are jockeying for position to ensure they can provide relay connections at the most competitive price.

Maersk partnered with Dutch-based commercial feeder operator BG Freight Line last July with a dedicated feeder connection between Waterford and Rotterdam, but that has been replaced by a new agreement with Hapag-Lloyd.

Hapag-Lloyd said last month it wanted to “support industry in the south-east of the country by providing an additional shipping solution” to and from Waterford.

“The close proximity to continental Europe will provide these customers with a more cost-effective and efficient service while connecting exporters and importers to a variety of international trade routes,” said the carrier.

A Dublin-based source told The Loadstar last week he believed the BGF-Maersk agreement had broken down over the insistence of the latter that the feeder operator should not carry any competitor line containers via Waterford. Another source, close to the original deal, added that the minimum slot guarantee given by Maersk did not make the call viable without third-party boxes.

Neither BGF nor Hapag-Lloyd are likely to reveal details of their new dedicated feeder agreement, but The Loadstar understands that the feeder operator is free to take boxes from rival lines on the service.

The French transport group is keen to describe Containerships as “independently operated”, and is mainly targeting Irish door-to-door domestic business, but its new service from Dublin is expected to give priority to CMA CGM feeders and says it is “open for container bookings from any source”.

In addition to Peel Ports-owned BGF, the Irish feeder market is dominated by ICG’s Eucon and Netherlands-based Samskip – which cooperate within an operational-only vessel-sharing agreement – and Singapore-headquartered X-Press.

Deepsea connections are heavily focused on transhipment from Ireland via Rotterdam, but feeder networks also serve Antwerp and Le Havre as well as the UK ports of Southampton and Felixstowe.

However, uncertainty over a no-deal Brexit could see a reduction in relays via UK ports.