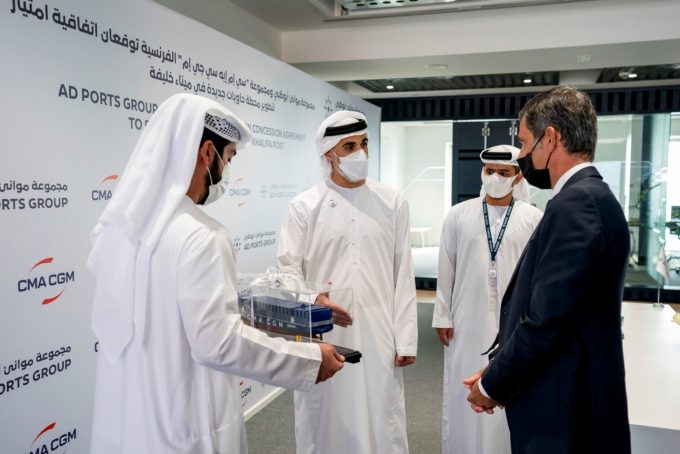 The joint-venture development – 70% held by the French carrier’s port operating subsidiary CMA CGM Terminal, and the remaining 30% by ADPG – will reach a combined investment of $154m into the project’s first phase, which will see an 800-metre quay built with an annual handling capacity of 1.8m teu.

Construction of the terminal is scheduled to begin later this year with operations expected to be launched in 2024. CMA CGM will join MSC and Cosco in the roster of shipping lines jointly operating box facilities in conjunction with ADPG.

In particular, the move could see the Ocean Alliance’s cargo flows in the region concentrated at Abu Dhabi, given that CMA CGM and Cosco are its lead carriers.

According to the eeSea liner database, the Indian Subcontinent/Middle East-Europe EPIC service, which is operated by Cosco and CMA CGM, in cooperation with Hapag-Lloyd and ONE, currently calls at Cosco’s CSP Abu Dhabi Terminal.

In contrast, the 2M partners MSC and Maersk have diverted Gulf calls on three of their Asia-Europe services – the AE15/Tiger, AE11/Jade and AE7/Condor strings – to the MSC Abu Dhabi Terminal since it began operations in 2019, leading to huge growth in container volumes across the port.

Last year the port posted a throughput of 3.2m teu.

“The terminal will provide CMA CGM with a new regional hub and will enable the Group to develop its service offering between Abu Dhabi and South Asia, Western Asia, East Africa, Europe and the Mediterranean as well as the Middle East and the Indian sub-continent,” noted a joint statement.

Mohamed Juma Al Shamisi, group CEO of ADPG, said: “The addition of a new container terminal at Khalifa Port, which will be managed by a joint venture formed in collaboration with CMA Terminals, opens a new chapter in our organisation’s efforts to become a key facilitator of global trade, and elevates Abu Dhabi’s standing as both a regional and an international hub for maritime trade.

“With the addition of another leading worldwide shipping group company, [it] will make Khalifa Port a hub for three of the world’s top four shipping companies.

“At home, we expect the presence of the shipping line terminal, which will link directly to Khalifa Port’s upcoming rail terminal and utilise its services, to accelerate trade flows moving in and out of the UAE, while also encouraging CMA CGM Group’s customers to consider establishing a presence in Abu Dhabi,” Capt Al Shamisi explained.

Rodolphe Saadé (pictured above, right), CMA CGM group chairman and CEO, added: “The ambitious project we are launching in Abu Dhabi marks an important milestone in CMA CGM’s development strategy in the region.

“This state-of-the-art terminal will contribute to enhancing Khalifa Port’s position as a leading global hub and to boosting the region’s economy, accelerating trade flows in and out of Abu Dhabi.

“It will also enable our group to expand its shipping and logistics network in the region, where we see a lot of growth potential.”