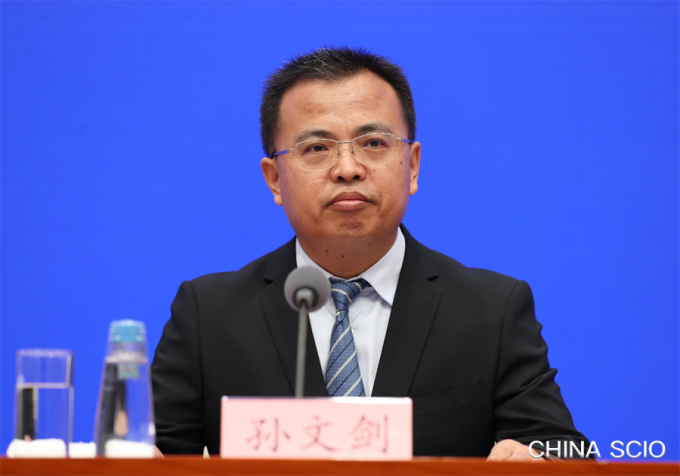 China’s Ministry of Transport (MOT) is encouraging Chinese exporters to sign long-term shipping contracts with liner operators as a hedge against the unprecedented spike in container freight rates.

Spokesperson Sun Wenjian (pictured) said the ministry viewed long-term container shipping contracts as a means of stabilising supply chains, which have been disrupted by Covid-19 outbreaks and typhoons in China and port congestion on the US west coast.

The MOT is folowing its Korean counterpart, which is already subsidising shipments tied to long-term transport contracts.

Mr Sun said: “Long-term customers are a major income source for liner operators and, outside China, many big shippers sign long-term contracts to be assured of stable freight rates and service reliability.”

In the first eight months of this year, China’s foreign trade grew by nearly 24% year on year, of which exports were up by 23%. However, rising freight costs are a concern. Drewry’s World Container Index showed that, last week, the costs of shipping a 40ft container from Shanghai to Los Angeles was 329% costlier, year on year, at $10,377.

A shortage of containers, due to the slow return of empties from Europe and the US, as well as inadequate shipping slots, have placed upward pressure on freight rates.

The tightness in shipping capacity has caused a number of shippers to turn to rail freight as an alternative, with the number of monthly China-Europe freight trains exceeding 1,300 trips in the four months to August.

Ms Meng Wei, spokesperson for China’s economic planning agency, the National Development and Reform Commission, said that in the first eight months of the year, 10,052 China-Europe freight trains were launched, 32% more than last year. And 967,000 teu of containers were railed to Europe, up 40% year on year.

Ms Meng said: “Since the Covid-19 pandemic broke out, there have been more than 1,000 China-Europe freight trains launched every month for 16 consecutive months, fully demonstrating the “resilience” of this supply chain. Amid continued tension in the international supply chain, the China-Europe freight trains have maintained safe and stable operations, solving an ‘emergency’ for many shippers.”

The fractious relationship between ocean carriers and their freight forwarder and NVOCC customers is seen ...