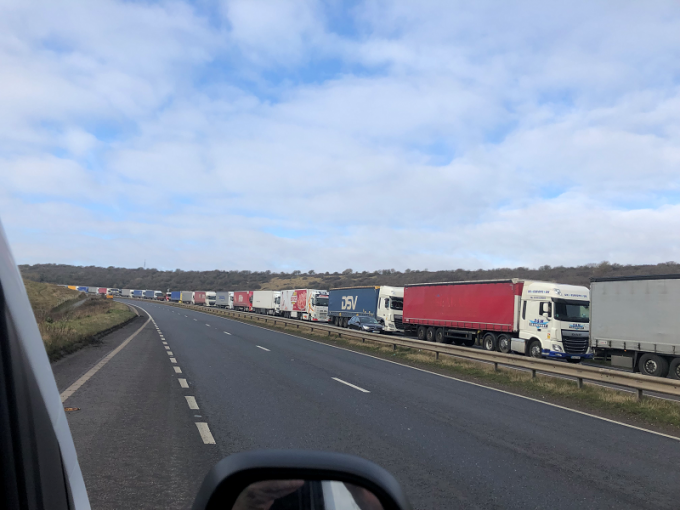 The Dover TAP on the A20 in operation today with truckers queueing to board ferries. Credit Nick Savvides.
By Nick Savvides in Dover
26/01/2022

Truck queues at the UK’s major ro-ro port in Dover diminished today, from 282 lorries waiting on the A20 dual-carriageway yesterday to 189 at around 11am.

The Loadstar’s fact-finding mission to Dover has shone a light on the local traffic management system, Dover Traffic Access Protocol, known locally as the Dover TAP, which comes into use periodically.

Although much has been made in the media about the Dover Tap and the queues of traffic, on average, the town handles some 8,000 lorries a day, and the current queue is mainly due to it being the busy part of the week and three ferries, about a third of available capacity, being out for refurbishment.

Dover has busy days and less-busy days, according to truck drivers The Loadstar spoke to at Priority Freight’s secure truck stop near the Whitfield industrial estate, some 3km north of the Eastern Docks.

The weight of freight traffic through the town increases on Tuesdays, when much of the European freight enters the country. European drivers will then want to drop their loads and return to Dover on Thursdays, so they can get home, often in Eastern Europe, for the weekend.

As a result, the town’s traffic tends to increase and decrease periodically, as if the town itself is breathing.

“UK-based drivers often plan to avoid these days so that they can miss the rush”, said one driver, adding that the “European drivers prefer to get to France and have their rest period in a French truck stop, because the food is far better, the showers are clean and area itself is clean”.

Another driver added: “Many of the UK truck stops are dirty; you get out and you’re walking in mud. We live in our trucks so we don’t want to bring all that filth into the space we live and work in.”

Priority Freight is considered one of the better truck stops in the UK, and operations director Andrew Austin was proudly showing off the new £1.5m (an approximate figure which Priority would not confirm) development at the facility, due to open in about a month, complete with men’s and women’s toilets and showers, a 50-seat restaurant and customs facility with cage for trucks that need help with clearance.

Drivers in the current canteen were very happy with the new development, but pointed out: “It’s not free, like it is on the continent. Some of the places there are so nice drivers take their families to eat there, it’s hotel standard.”

Mr Austin, who agreed continental facilities for drivers were generally of a far better standard, pointed out that when drivers booked into Priority’s facility they were given a voucher which would pay for a decent plate of food. 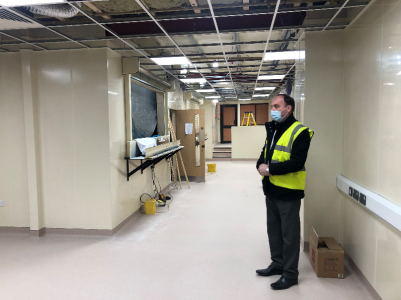