News / 'A great year for air cargo', which now makes up one third of airline business 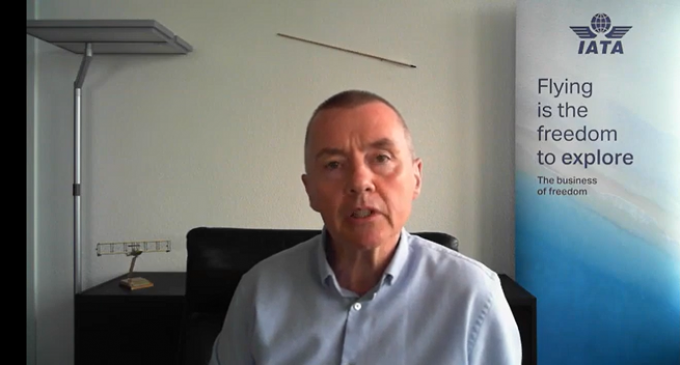 Setting out his priorities for the sector, Mr Walsh said digitisation was key to the industry, and that cargo had “lagged” behind the passenger business.

But now cargo is recognised as a key revenue stream, airlines are more likely to invest.

“I’m convinced money will be made available,” he said. “You have to prepare businesses for the future and there is an awareness of the contribution cargo makes.

“I’m convinced there are sufficient funds available to make investments. The benefit is very significant and will help improve safety, revenue generation … and the data makes you more efficient.”

“Cargo is now one-third of airline business,” said IATA chief economist Brian Pearce. “It used to be significant, but not the most important part of the business.”

He said as passengers gradually returned to the market, cargo’s contribution would diminish, but he added: “It will still play a crucial role this year.”

On the transatlantic, which remains more passenger-driven than some routes, business and first class accounts for about 30% of revenue, as does economy, while cargo makes up the remaining 41%, according to an IATA model based on a 777-300.

Passengers account for 46% of revenues on Europe-Middle East, while Middle East-Asia has the lowest passenger income, at just 33%.

Mr Walsh said the changes in the market also meant airlines had had to review their strategies.

“Network planning teams have had to look at the business in a completely different way,” he said. “In passenger airlines, cargo is seen as ancillary, even though the impact on a network might be the difference between a route being profitable or loss-making.

“Cargo contribution is a critical factor in the launch of routes. People will better appreciate cargo’s significant financial impact on the business.”

Revenues and yields remain high, because demand is high and capacity is scarce – despite there being 20% more freighter capacity than pre-crisis. 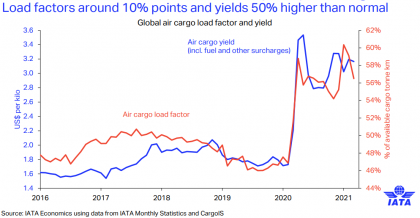 “But overall there is still a shortage of capacity,” explained Mr Pearce, “which is still down 14% on 2019.”

Passenger freighters had “played a really important role in providing capacity in some markets”, he said. “They’ve provided between 41% and 65%, sustaining connectivity on long-haul markets.”

But while volumes are up, flows are patchy. The strongest markets have been flows through Middle Eastern hubs, while the north Pacific is also “very strong”, said Mr Pearce, with the economies of both China and the US doing relatively well. Europe has fared less well, with repeated lockdowns weakening economies.

Mr Pearce pointed to data for the Americas, which show North American markets up 20% on pre-crisis levels – but also that, despite some strong flows between North and South America, Latin American carriers had fared badly.

“Governments in the region have not provided the support they have in other areas. Some Latin American airlines are in bankruptcy proceedings and are losing market share,” he said.

Mr Walsh summed up: “It’s been a great year for cargo, and a terrible year for airlines.” And he added that IATA’s three key priorities for cargo this year were sustainability, safety and digitisation.