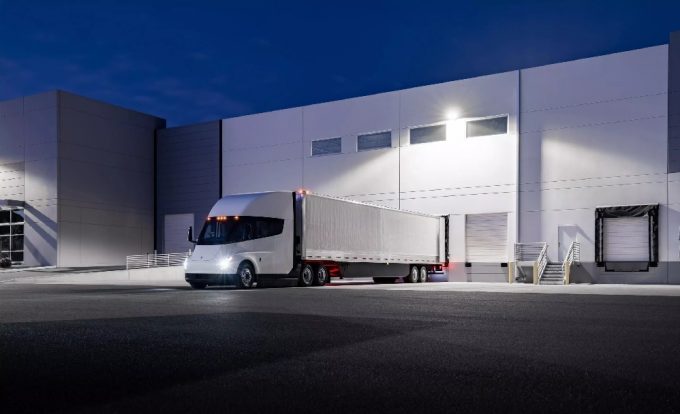 The first of a fleet of long-awaited Tesla Semi electric cab-over-engine trucks has completed its maiden cargo journey for PepsiCo.

Tesla began production of 100 trucks, ordered by PepsiCo in 2017, in October.

Its engineers have fought to overcome the main challenge of an all-electric truck design: the vehicle must haul the weight of lithium-ion batteries as well as that of its cargo.

The drawback is common to all proposed electric trucks, with Volvo, which beat Tesla to the punch in September by beginning production of a series of three all-electric trucks with a maximum range of 380 km.

Tesla CEO Elon Musk, who invested $6.5m in the electric carmaker in 2004, a year after it was founded by Martin Eberhard and Marc Tarpenning, was keen to broadcast the success via his newly acquired social media platform, Twitter.

The 500-mile journey of the Semi was “completed at highway speed, without charging on the way, and over 4,000ft of elevation,” he tweeted, highlighting the vehicle and cargo’s combined weight of 36.7 tonnes.

“If you’re a truck driver and you want the most badass rig on the road, this is it,” he said, at its live unveiling, streamed over Twitter.

However not everyone is awestruck. Oliver Dixon, senior analyst at Guidehouse, described it as “not very impressive”, telling Reuters that moving a cargo of potato crisps (average weight per pack, 52g) cannot “in any way be said to be definitive proof of concept”.

Indeed, the average range of a diesel-powered truck of a similar size would be more like 1,600 km and, while battery technology is expected to improve over time, all-electric trucks will still be plagued by ‘range anxiety’ for some years.

Charging is also a concern. Tesla plans to roll out a network of ‘megachargers’ in the coming years, having delivered the first to the PepsiCo facility in Modesto, California. They will be capable of charging at 1MW/h, and enable the truck to charge up to 70% in 30 minutes, using a liquid-cooled charging cable to support the high electrical load.

Late last year, Florian Laudan, a spokesman for Daimler, told The Loadstar his company would be opting for hydrogen-fuelled trucks, which, he said, would be more practical.

“We don’t see battery-electric will suffice in terms of long-haul. If you go to a fuel station, it is not unusual to see 80 trucks parked. If you imagine what would happen if these 80 trucks plugged into a charging network – you would need a power plant close to every fuel station.”

However, PepsiCo’s maiden trip will likely bring positive change for Tesla’s rollercoaster share price, which halved in the past year after its CEO tweeted “Tesla stock price is too high [in my opinion]”, in May.

General Motors (GM) announced on Friday it would shut down production at most of its ...

Against the odds: Bitcoin balance sheets in logistics? No thanks, but...

SA: Tesla racks up $1bn profit on Bitcoin and counting