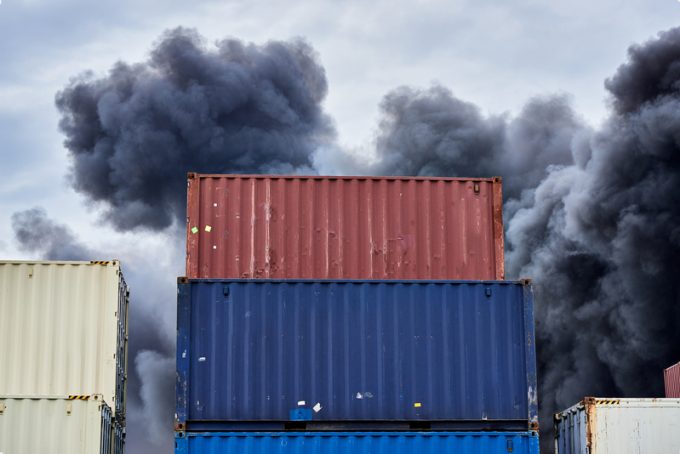 Poorly packed containers and shipper misunderstanding of the dangers of some non-hazardous cargo could result in more than $6bn in annual damages to the supply chain.

Leading freight and transport insurer TT Club has renewed its call to shippers and other cargo interests to “take responsibility to ensure the risks are mitigated”.

It said its “analyses consistently indicate that two-thirds of incidents related to cargo damage are caused or exacerbated by poor practices at the time of packing goods into a freight container”.

It explained: “Such supply chain malpractice results in multi-million dollar losses, including tragic containership fires with loss of seafarer lives and significant delays. Extrapolating known figures, all such incidents are estimated to result in economic losses exceeding $6bn per year.”

Michael Yarwood, MD of loss prevention at TT Club, added: “The dangers are not just restricted to chemical cargo, such as used in paints, cosmetics, cleaning products, fertilisers, weedkillers and aerosols.

“A wide variety of consumer goods, as well as components used in the manufacture of industrial products, domestics white goods and automobiles, if incorrectly handled in transit, can cause major disasters.

He said: “Those involved in sourcing, importing, storing, supplying or selling such commodities should ensure their procurement and logistics standards are of the highest level.”

He urged shippers to refer to the nearest thing the industry has to regulations covering the packing of containers: the Code of Practice for Packing of Cargo Transport Units (CTU Code), jointly published by the IMO, International Labour Organisation and United Nations Economic Commission for Europe.

Mr Yarwood said: “It provides comprehensive information on all aspects of packing and securing of cargo in freight containers and other transport units across all sea and land transport modes. It guides not only those responsible for packing and securing cargo, but also those who receive and unpack the goods.

“It also addresses the vital issue of correct description and declaration of the goods, including any specific information about the treatment of dangerous goods,” he added.

He said: “In addition to the serious health and safety risks already described, poorly packed containers can also cause damage to adjacent cargo in the event of incident, and have been a cause of major consequential losses for shippers.

“The GSF played a leading role in the development of the advice in the CTU Code and contributed to the writing of the Quick Guide and Container Packing Checklist.”

The owner of the nitric acid cargo that leaked on the X-Press Pearl “should have ...

“Worse things happen at sea,” goes the old saying, but occasionally a momentary loss of ...

X-Press Pearl 'a total loss' and hits rock bottom, despite efforts to move it

The smouldering wreck of the X-Press Pearl has settled onto the ocean floor after water ...

The captain of the X-Press Pearl, which has been burning off the coast of Colombo, ...

Japanese carrier NYK, part of ONE, has declared General Average on the NYK Delphinus, which ...

Fire in the hold General Average NYK ONE Port of Oakland Worse things happen at sea
May 27, 2021• 0 Comments• Share

Burning X-Press Pearl in danger of sinking, as lost boxes start to wash up