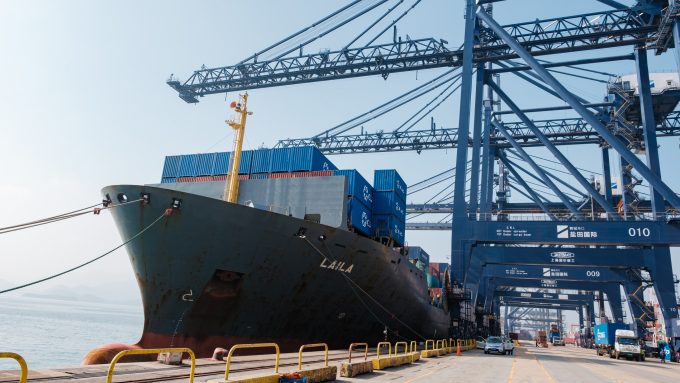 Intra-Asia carrier China United Lines (CULines) and Dusseldorf-based international purchasing association XSTAFF have teamed up to operate the sub-panamax 2,702 teu Laila (pictured above) on a one–way voyage from China to North Europe.

And the two companies are already planning a second voyage after space on the Laila was fully booked “just a few days” after being offered.

Formed in 2016, by the Swiss COOP group and the Belgian Colruyt group, the XSTAFF network was expanded in 2019 with the addition of Spanish fashion giants Mango and Tendam.

The 2008-built vessel sailed from Yantian, China, on 8 February for Rotterdam and then Hamburg and is expected to arrive at the beginning of March.

XSTAFF said it had partnered with CULines to offer clients “an alternative to the existing services on the Asia–Europe route”.  It said its clients were facing “extremely high cargo rates, limited container availability and frequent delays”.

“Container spots on freighters headed to Europe are booked out weeks in advance – and that despite price rises of up to 800% compared with the same time last year,” said XSTAFF.

“Our members need planning security, a contractually secured cost framework and reliability in the service provision. In view of the compelling market situation, we decided to take matters into our own hands and offer our own transport capacities,” said XSTAFF chairman Bodo Knop.

The call at Rotterdam by the Laila could be just to take on bunkers, as its full load of “non-food products destined predominately for European DIY and supermarket chains” will be discharged at Hamburg.

The Loadstar understands that after off-hire at Hamburg the Peter Dohle-owned ship will start a long-term charter with a major carrier.

XSTAFF did not confirm the number of containers on the vessel, but assuming that the cargo consists of mainly 40ft standard and high-cube containers, it could be between 1,000 and 1,250.

As an example, the recent one-way charter by Geodis of a multipurpose vessel with 1,000 teu capacity from Shanghai to Hamburg, scheduled to arrive at the German port on 28 February, carried 435 40ft containers.

XSTAFF said the charter was planned as “a one-off initiative, due to strong demand” and that the focus “was not margins”. Nevertheless, The Loadstar’s ‘back of an envelope’ calculation, adding charter hire, bunker costs, Suez Canal tolls, port costs and container leasing etc, would provide for a breakeven voyage result at around $5,000 per 40ft, assuming a load of 1,250 boxes.

Current spot rates from China to North Europe can be as high as $8,000 per 40ft, after including carrier equipment and space guarantee fees.

“Preparations are already underway for a second voyage in the first half if the shipping environment has not improved,” said XSTAFF.