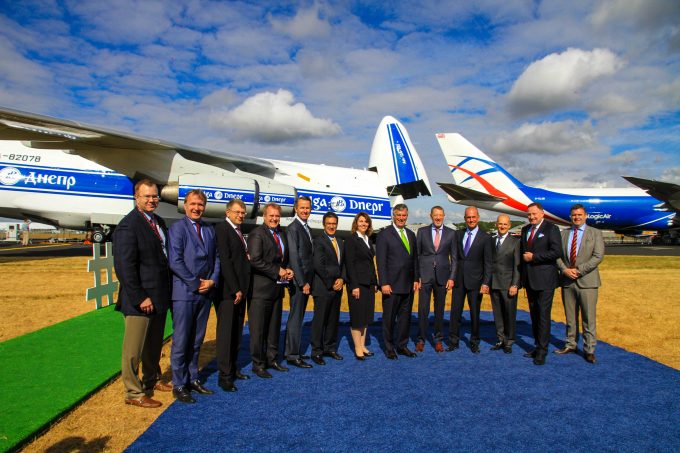 Volga-Dnepr Group and sister UK company CargoLogicHoldings today announced an order for five B747-8Fs, as well as a letter of intent for a staggering 29 B777 freighters for its UK airline, Cargologicair.

The companies also said they were looking at new production 767 freighters and converted 737-800Fs.

While there have been doubts whether Boeing would continue to make the 747, one industry source said the airplane manufacturer had made 20 kits for the 747-8F, of which UPS took 14.

“To get five of the remainder is a realistic aim,” said the source.

Alexey Isaykin, president of Volga-Dnepr Group, said: “We are true believers in the 747-8 freighter; it is a very special airplane. We fly it every day and we understand why operators around the world want more of them.”

In a statement, Volga-Dnepr added: “While the group and its partners have largely built its business on very large four-engine freighters, it now plans to expand its future fleet options with a commitment for the twin-engine 777 freighter.”

Mr Isaykin said the letter of intent to buy 29 777 freighters would “open new market opportunities”. This sparked more speculation over where they would be placed and whether the market could manage such a boost in capacity.

One industry source said: “Something’s got to give [in the market]. You never know; if Atlas were bought by Amazon, it would have a conflict of interest with [partner] DHL. Perhaps this could be a replacement for Atlas.”

Volga-Dnepr Group is known to be working towards a German AOC under the name Value Cargo Logistics, a subsidiary company based in Leipzig.

The announcement also comes as the Russian group struggles with its profitable AN-124 business, as well as facing tricky US-Russia relations. The announcement, which also included a crew optimisation service for AirBridgeCargo, marks a significant expansion of the group’s relationship with US company Boeing, potentially giving it more political clout in the west.

It also said the group was working with Boeing on  developing “new freighter solutions”.

Any order for the 767 would need to be a new production freighter, following Atlas and ATSG’s moves to snap up all the feedstock in the market to satisfy their Amazon commitments.

The announcement is vague over further details, but one source advised the market to remember that, aside from the 747-8F deal, it was based only on a letter of intent. It is thought that Boeing itself may have initiated the letter of intent.

One source with knowledge of the situation shed some doubt over Volga-Dnepr’s ability to finance any order out of today’s announcement, which at list prices would be some $11.8bn.

Volga-Dnepr Group’s main backer is Russia’s Sberbank, with which it signed an agreement of intent last year for a $265m non-renewable credit line for a term of five years.

At the time, senior vice president of Volga-Dnepr Group Sergei Shklyanik said: “Sberbank is our main financial partner. As part of our strategic cooperation agreement we have carried out several transactions to finance the purchase and leasing of aircraft made by domestic and overseas producers. This agreement is an example of the practical realisation of strategic cooperation.”

But one source thought it unlikely that the Russian bank would extend this much credit for 34 US-made aircraft.

“The biggest question is where they would get the money from. It would have to be western financing. But Alexey Isaykin has pulled off so many things in the past which people said he couldn’t, so who knows?”